Getting Healthy: It's Better All Together 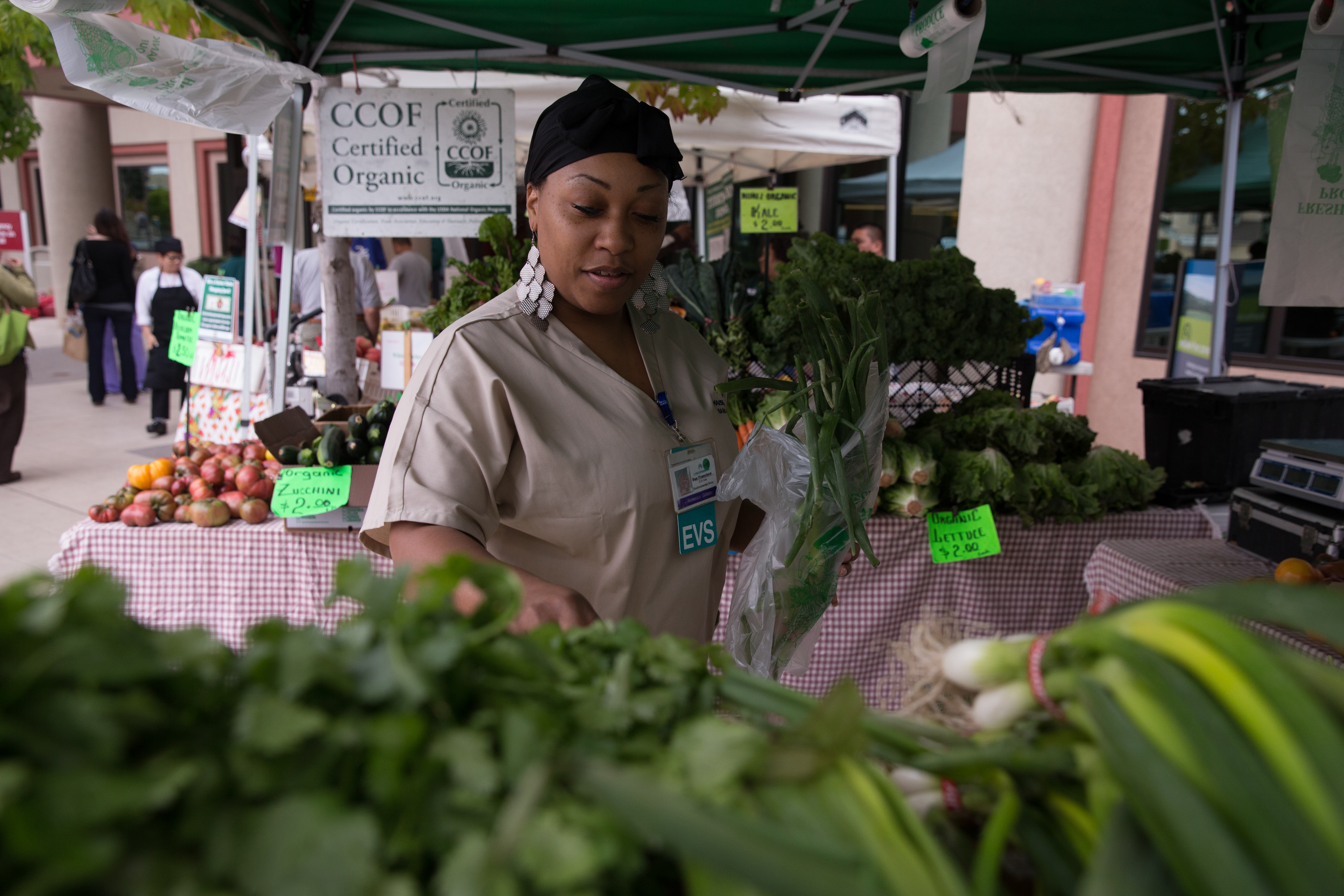 Holly Craft Moreno was a medical assistant in a geriatrics department. But she’d occasionally put in a few overtime hours at the infusion clinic at her hospital. One day, a young woman—a woman who was her father’s only daughter, who had not yet had children herself—came to the clinic for an infusion. Her prognosis was grim. As Moreno checked the patient in, she thought to herself, “This might have been prevented by a Pap smear.”

And when her shift ended, Moreno says, “I walked down the hall and scheduled an appointment with my ob/gyn.”

That day six years ago was the start of Moreno’s journey as a wellness champion at the Panorama City Medical Center in Southern California. A member of SEIU UHW, she’s been active in rallying her colleagues toward better health. One of her first projects was putting together a “Passport to Thrive,” a brightly colored checklist for recording the dates of preventive screenings and key health measures such as blood pressure and cholesterol.

This fall, efforts like hers are taking a giant leap—or perhaps Zumba shimmy—forward with Kaiser Permanente and the Coalition of Kaiser Permanente Unions announcing the details of a new Total Health Incentive Plan, the broad outlines of which were negotiated as part of the 2012 National Agreement. (Non-represented employees and most managers also will be included in the program.)

The plan is a bold, unprecendented step that acknowledges that ill health is not solely the result of individual choices and that chronic illnesses, which drive much of the high cost of health care, must be addressed collectively. It recognizes an employer can do a lot to support employees in creating better health habits.

“We’ve created a groundbreaking program around the health of our workforce, and it will have a legacy for decades to come,” says Kathy Gerwig, KP’s vice president of Employee Safety, Health and Wellness. “By building a community of support throughout the organization, we’re hoping it will be easier for healthy individuals to stay healthy—and that it will be easier for those with health risks and conditions to get the resources needed to improve.”

The program will track the overall progress of those covered by the incentive plan, region by region, on four key indicators of health—body mass index (BMI), smoking status, blood pressure and cholesterol. There will be a payout of $150 if 85 percent of managers and employees in a region have up-to-date health screenings by year-end 2014 and another $150 if 75 percent also take the total health assessment (THA). If both those goals are met, there’s another $200 if the region sees at least a 1.7 percent improvement in the at-risk population and there is no decline in any of the four areas being measured.

Taking the THA—a confidential, online questionnaire that helps a person take stock of a wide range of issues affecting his or her health and offers personalized advice—can be a first step toward the improvements the plan aims for.

“You probably know if you aren’t eating enough vegetables or if you’re drinking too much—but the THA helps you become more immersed in creating an environment and awareness of healthy living,” says Cynthia Beaulieu, the union coalition’s Total Health labor lead in the Northwest region. As a result, she says, “you’re more likely to participate in it.”

The incentive program has been derided in some quarters, but most are applauding the effort to confront the prevailing belief that an individual’s choices on matters of health are independent of the culture and environment that person lives in.

“The forces are too strong for any one person or organization to do it alone,” says Roger Benton, the Healthy Workforce practice leader for the Southern California region. “There are unhealthy negative influences that we all get caught up in—stress, sedentary lifestyle, food choices—all of which lead to chronic illnesses.”

Like many other aspects of the Labor Management Partnership, the creation of the Total Health program came about because of a shared interest between management and labor: Improving the health of the workforce is a priority.

As SEIU UHW President Dave Regan points out, “If current trends continue, by the year 2021, 15 percent of Americans will have diabetes; one-third of our population will be pre-diabetic.”

The human and financial costs would be catastrophic—but can be avoided if a joint campaign to improve the health of workers succeeds. So in part, Total Health is a response to the high cost of health care.

“The employer told us the cost for health care for union members is too high,” says Walter Allen, the executive director of OPEIU Local 30 who is serving as interim director of the coalition. “The choices are A) shift more of the cost to workers or B) bring down the cost. We will take plan B. The main way to keep costs down is for people to be healthier and require less care. An incentive is a way to start people off—above and beyond the reward of being healthier.”

By lowering costs, the organization’s financial picture improves, which helps ensure KP’s success and longevity. Improving the health of our large employee population group also would demonstrate to other employers the value of this approach.

In exchange, KP “will leave cost sharing as it is,” says Allen, noting that at a time when many unions reluctantly were accepting concessions in their contracts, health insurance benefits for union coalition members remained unchanged in 2012 bargaining.

“We made a commitment, and now we have to come through,” Allen says.

But Total Health is more than the sum of economic interests. It’s about how KP and the coalition are leading the way to shift the culture of workplaces toward wellness. Frontline caregivers know they need only look in the mirror to see they suffer from many of the same ills as their patients. It’s time to lead by example.

“Healthy health care workers make for healthy communities,” says Stacey Anderson, an imaging assistant and UFCW labor partner at Sunnyside Medical Center in the Northwest. “I believe we can set the standard for others to follow.”

At KP, the growing emphasis on employee wellness is a natural complement to the preventive care model.

“We’ve got to create a culture where doing the right thing is the easier thing to do,” says Sylvia Swilley, MD, the physician Healthy Workforce champion at Downey Medical Center in Southern California, where Pop Chips (120 calories per bag) recently replaced Fritos (160 calories per bag) in the vending machines. “We can’t serve stuff in our cafeterias that we tell members in their health education class not to eat. We have to be the face of how to do it right.”

While many workforce wellness programs reward—and punish—individuals for their success or lack thereof, the KP plan will calculate results at the regional level.

“Some people will see it as unfair,” says Elba Araujo, a pharmacy assistant at Los Angeles Medical Center and UFCW Local 770 member. After all, the person who keeps smoking and gains weight might end up with the same bonus as the person who quits smoking and lowers her cholesterol. “But if people see results,” she says, “they will want to get involved.”

By offering programs such as KP Walk!, Mix It Up and the total health assessment, Kaiser Permanente is doing its part, says union leader Allen. In return, he says, the unions are saying, “We will do our part; we will educate our members.”

“We are in health care. We have to take care of ourselves,” says Judy Coffey, a senior vice president and area manager of the Marin-Sonoma Service Area in Northern California, who helped negotiate the plan. “Wouldn’t it be great to be able to say our employees have lowered their cholesterol, their blood pressure, their BMI?”

“But it will help the individual more,” she says. “It helps the patient, the company and yourself.”