Affordable Health Care for All 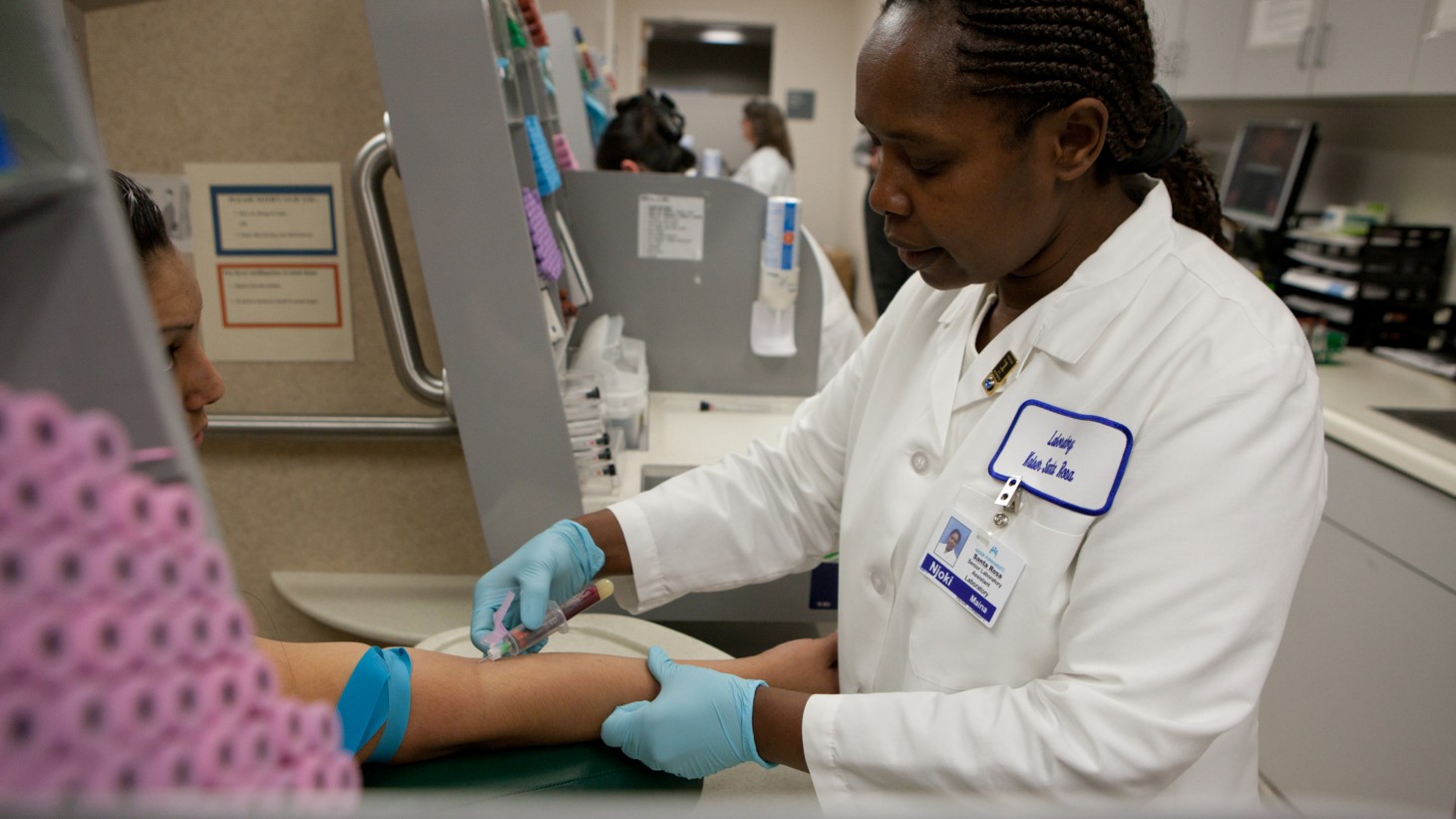 Njoki Maina, a senior lab assistant and SEIU UHW member, works in the lab at Santa Rosa Medical Center lab, which saved money by reducing its use of butterfly needles.

How UBTs are making it happen

Jeff and Sara Simmons describe themselves as a “pretty average, middle-class” family living in a Northern California suburb with their sons. “We live a Lego life with two boys,” laughs Sara, describing her toy-strewn living room.

But eight years ago, Sara was diagnosed with Type 1 diabetes, thrusting her into a routine of checking her insulin, monitoring her diet—and paying steep bills for medication and medical equipment. Recently, 7-year-old Owen also was diagnosed with the disease. And the family has to plan for the possibility that 5-year-old Griffin might be diagnosed with it as well.

Even though the family has medical insurance with Kaiser Permanente, the new bills related to Owen’s care overwhelmed them. They applied for help from one of KP’s medical assistance programs, which helped tide them over until they could get a handle on their new reality.

In the months since, the Simmonses have made some tough choices—deciding, for example, to sell their home and move to an area with a lower cost of living. But Jeff, a manager in a major corporation, worries about how families with lower incomes and fewer health care benefits than his would have fared under similar circumstances.

“How do they do this?” he wonders. “How are they surviving all of these curveballs?”

Health care is “absolutely not” affordable for most people, he says—then adds, “Everybody should have affordable health care. Period.”

The passage of the Patient Protection and Affordable Care Act in 2010 was a major step toward ensuring all Americans have access to health care. As provisions of that act take effect in 2014, Kaiser Permanente will have an extraordinary opportunity to further our historic mission of providing affordable, high-quality health care to working families. But with the opportunity comes a difficult financial reality. Because these incoming new members may not have had access to health care in the past, they may be costly to treat—and federal reimbursements may be on the low side. In addition, the federal government has recently cut the rates for Medicare reimbursements, which typically have provided about one-third of KP’s revenue.

So Kaiser Permanente and unit-based teams face the challenge of treating more—and perhaps sicker—patients with fewer resources while maintaining and increasing the quality of care. Now more than ever, allocating our resources wisely is vitally important.

It’s easy to see how departments with multimillion-dollar budgets play a role in keeping KP affordable. For example, National Facility Services kept an eye on potential energy savings when a new data center was built and saved about $450,000 in electricity costs in 2010 and earned a $300,000 incentive from the local utility company. Another example: KP saved $26 million in 2010 alone by buying safer and more environmentally friendly industrial chemicals. And a redesign of the way KP deploys computer workstations saved $12 million as of August 2011.

But unit-based teams have just as big a role to play, even if most don’t control huge budgets. The fact that there are more than 3,500 UBTs across the organization means savings can add up dramatically.

Some teams are saving “light green dollars,” focusing on efforts that indirectly improve the financial picture. That might be boosting service and quality, which helps us get new members and retain the ones we have, or improving patient safety, which reduces a variety of expenses, including costly hospital readmissions.

Others are tackling “dark green dollars,” direct savings that improve the bottom line right away. In fact, efficiency and non-payroll cost reduction is the fastest-growing category of projects for teams, according to an analysis of UBT Tracker data.

Is your team looking for new ways to save light or dark green dollars—or in need of ideas to get started saving? Read Four Ways to Save.

51 people found this helpful. Was it helpful to you? YesNo