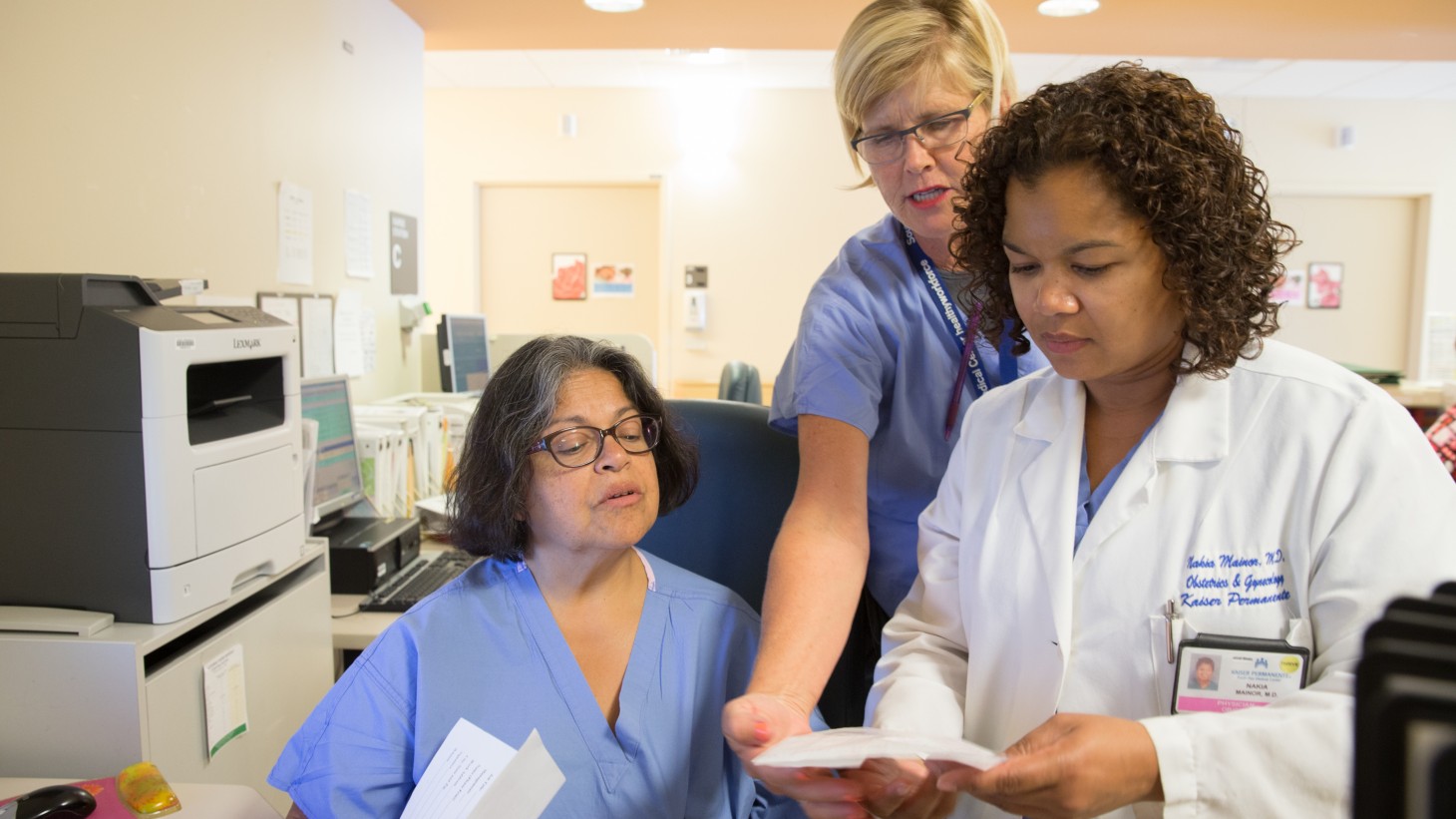 Members of the Labor and Delivery UBT at South Bay Medical Center in Southern California, a high-performing team

Spurred on by a Performance Sharing Program goal, UBTs in the region are focusing on affordability and efficiency by taking on improvement projects with identified cost savings or revenue capture. Teams are finding ways to work together. For example, the Stapleton Cytology and Molecular lab teams increased productivity by cross-training and solving problems together. As of August 2014, the teams are processing five times more HPV screenings a month than in 2012. The region also is celebrating strong membership growth.

Clinicians know a lot about medicine and less about the health insurance benefits their patients have. Members of the unit-based team at the Douglasville Medical Office knew that frustrated patients. They set out in July 2013 to improve the staff’s understanding of member benefits through an ambitious 12-week training session. Before starting the weekly classes, staff members scored an average of 68.5 percent on a test about member benefits. By the end of October, their average score was 95 percent. The team credits its newfound business literacy for boosting service scores, which helped Kaiser Permanente retain a major city account and win a new one.

More than 1,000 new health plan members joined Kaiser Permanente this summer, thanks to the collaboration between Kaiser Permanente and the Coalition of KP Unions to grow KP membership. The effort started in May with a strong presence at a conference of the Hawaii Government Employees Association—one of six unions covered by the state Employees’ Retirement System, KP Hawaii’s largest customer. Conference delegates visited the KP booth, took Body Mass Index (BMI) readings and participated in a KP-sponsored walk. KP followed up with mailers to prospective members, presentations to union retirees, invitations to tour KP facilities and more. Lynn Ching, labor liaison for the Labor Management Partnership in Hawaii, and Troy Tomita, a KP senior account manager, worked on the project together. “It’s a great headstart for open enrollment in October,” Ching says.

Members of the Ambulatory Surgery Center unit-based team in Gaithersburg, Md., not only are putting the patient at the center of every effort, but also bringing the patient’s family members and friends into the fold. The team created a perioperative liaison role, in which a staff person is assigned to a patient and acts as point person, updating a patient’s friends or family members throughout the patient’s journey through the surgery center. After creating the new role in February 2014, the surgery center’s service scores jumped from 75.8 percent in January 2014 to 88.8 percent in April 2014.

Fremont Medical Center employees took all obstacles in stride when it came to adding physical activity to their workday as part of the KP-wide Instant Recess® week in early August. Nearly 200 Fremont workers Hula-Hooped, boxed, danced, hop-scotched and jump-roped as part of the facility’s Instant Recess obstacle course. Usually, Instant Recess is a 5- to 10-minute activity done to music, but it also can be any kind of fun activity that gets people moving. The San Francisco, Richmond and San Rafael medical centers were among the other Northern California locations that joined in the week of Instant Recess, which was organized by national and regional Workforce Wellness programs and the union coalition.

Working through unit-based teams, the region has launched a new focus on affordability. The UBT Resource Team is leading the charge by providing such resources as a project template and performance improvement tools, including 6S and the Waste Walk, as it works with teams. In addition, teams can reach out to subject matter experts in finance, purchasing and other areas for assistance. The region’s UBT Data Team will calculate the return on investment of the efforts and enter that information into UBT Tracker. Some teams, such as the Rockwood Medical Office Patient Registration UBT, are working on reducing paper registration forms to cut down on waste and save money.

Leaders at the South Bay Medical Center hosted a performance improvement fair for unit-based teams this summer, aimed at giving teams the tools they need to reach levels 4 and 5 on the Path to Performance. After grabbing some healthy snacks at the sign-in table, UBT co-lead pairs sat with an improvement advisor or UBT consultant and got customized advice on how to move their projects forward. For instance, the union co-lead from a medical-surgical unit reviewed data collection techniques at one table, while at another, food and nutrition team members filled out a fishbone diagram for their efforts to collect errant cafeteria trays. Co-leads got help entering their projects into UBT Tracker, then left with a packet of performance improvement tools.

average score for a UBT at the Douglasville Medical Office in Georgia after a training session on member benefits.

64 people found this helpful. Was it helpful to you? YesNo