No One Walks Alone: How San Diego Prevents Patient Falls 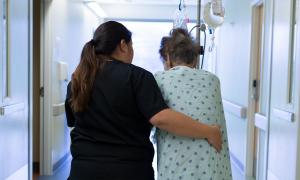 Among the telemetry units at San Diego Medical Center, 5 West had a bad reputation: It consistently had the most patient falls at the hospital. In 2011, for example, it had twice as many as the next-worst unit. Patients were suffering, as was morale. Managers and employees tried all sorts of measures to prevent falls—such as posting pictures of falling leaves on patient doors and using color-coded arm bands on patients to indicate fall risk—but nothing was improving patient safety enough.

Only when the unit-based team launched its “No One Walks Alone” campaign in 2012 did the numbers budge. It’s part of a larger trend in health care to shift from trying to assess a patient’s risk of falling to simply treating every patient as a fall risk and ensuring each patient is accompanied—especially to and from the bathroom, which is when most falls occur.

“This is for everybody, not just some,” says Lucila Gonzalez, RN, a UNAC/UHCP member who serves on the UBT’s representative group. After all, patients newly hospitalized after a stroke suddenly cannot do many things they used to do on their own. And elderly patients who were independent at home might resist getting help. “It takes time to adjust,” says Gonzalez.

The pilot project on 5 West—part of a collaboration with the Joint Commission for Transforming Healthcare that also involves six non-Kaiser hospitals—included installing bed alarms to let staff know when a patient was trying to sit up, so a caregiver could dash over and assist. When patient falls decreased dramatically in the first three months of the effort, the practices were spread in November 2012 throughout the hospital. And the results have stood up. The hospital previously had been averaging 16 falls a month. In October 2013, that figure was three a month.

Some employees had doubts about the initiative when it first started, says management co-lead Estela Enriquez. “They said, ‘Just don’t make it cumbersome.’ Others said, ‘It’s just not going to happen.’” Enriquez says, “For me, as a manager, it was an issue of staffing.” At first, it was harder to ensure nurses got their breaks. UBT members worked on their department budget and hired more unit assistants. They also worked together to build in time during the day for their added responsibilities. “We’d see nurses walking around the unit with the patients,” says Enriquez. “Then there was a sense of, ‘OK, maybe we can manage this.’”

The inpatient units are sustaining their results by talking in their huddles about the falls that do happen, rounding on patients hourly to get them out of bed and into the bathroom safely, ensuring that bed alarms are activated and celebrating their successes.

The slogan “no one walks alone,” which came from a UBT meeting, is more than a catchphrase, Enriquez says. “It is one that resonates with patients. The wife of a patient said her husband was embarrassed that ‘a big, strong guy’ couldn’t go to the bathroom by himself. The nurse finally got through to my husband when he said, ‘No one walks alone.’”

Jenny Button, director for business strategy and performance improvement at the hospital, says a key to success is to set an ambitious goal. It’s not enough to work to “reduce” falls or get to four a month, she says. “You have to say, ‘We want no falls.’”

9 people found this helpful. Was it helpful to you? YesNo