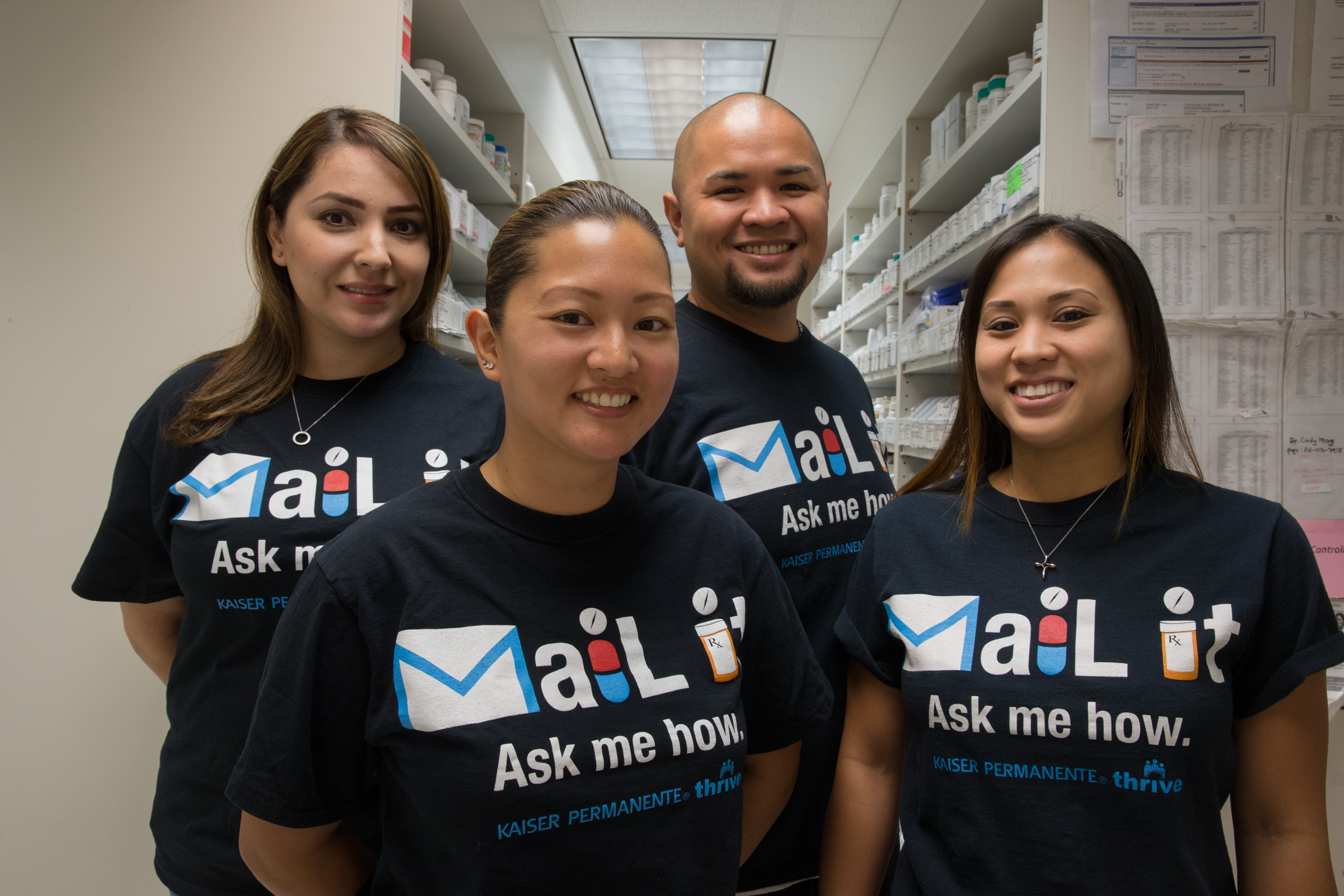 The Panorama City pharmacy UBT in Southern California encourages patients to use mail-order service, one way to keep KP affordable.

The new Lone Tree Specialty Care Medical Office, a 25-acre campus, boasts outdoor patios, picturesque mountain views and a walkway around the perimeter of the building. The facility, which opened in December 2013, was awarded a LEED (Leadership in Energy and Environmental Design) Silver certification by the United States Green Building Council. Lone Tree, which is near a light rail line, used recycled materials, water-wise fixtures and shading devices for balancing solar heat to win the LEED designation. The facility has nearly 350 employees and 45 physicians to take care of the 3,000 ambulatory surgeries and 3,000 minor procedures expected per year.

What happens when two nurses from two different high-performing UBTs transfer to the same brand-new Level 1 team? That team zooms to a Level 4 in only 10 months. Jane Baxter and Ingrid Baillie, both RNs, had been UBT co-leads at the Crescent and Cumberland medical centers, respectively, and then joined the Ob/Gyn staff at Alpharetta. Drawing on their experience—at different times, they each have been UFCW Local 1996 members and members of management—they helped their new UBT move up through the Path to Performance. “We knew the steps in the process and what to expect,” says Baxter. Their advice to fledging teams: Start with small performance improvement projects in areas that clearly are Kaiser Permanente priorities and that already have lots of data collected.

Nurses on the 1-West Medical-Surgical unit-based team at Moanalua Medical Center vastly improved how well they educate patients about medications, moving from about 40 percent of surveyed patients saying they understood side effects and other aspects of their prescriptions to 96 percent reporting this awareness. Between April and December 2013, the RNs, who are members of the Hawaii Nurses’ Association (HNA), made notations on patient room whiteboards, rounded hourly and did daily teach-backs on every shift. The team members designed a three-day survey for a sampling of patients to report what they understood about side effects of their medicine. The survey provided speedier feedback than waiting more than three months for HCAHPS (Hospital Consumer Assessment of Healthcare Providers and Systems) scores.

A Nephrology team at Tysons Corner Medical Center in Virginia helped patients prevent or manage chronic kidney disease by getting them into the classroom. Just 70 percent of the unit’s patients at risk of renal failure were enrolling in KP disease management classes in February 2013. But several successful tests of change boosted at-risk patient enrollment in March to 100 percent, where it has remained since. The team noted on individual patient charts if the member suffered chronic kidney disease, developed scripting for in-person coaching, mailed class invitations to patients’ homes and handed out class agendas with after-visit summaries.

The Modesto Pediatrics UBT improved wait times for immunizations—and not only increased service scores but also reduced overtime costs, an example of how a change can affect an entire system. The team reduced patient waits for immunizations from 45 minutes to 15 minutes between June and August 2013 and maintained the improvement through the rest of the year. A workflow change was key to the dramatic reduction. When a patient is ready for an injection, physicians now copy the orders to a nursing in-box instead of searching for a licensed vocational nurse to give the shot. The half-hour reduction in wait times—which is credited with improving service scores from 86 percent to 95 percent—also reduced the need for LVN overtime by an hour a day, resulting in savings of more than $16,600 over six months.

The regional Employee Health and Safety department won KP’s “Engaging the Frontline” National Workplace Safety Award. Through the Northwest’s Safety Committee Challenge, facilities had to complete a rigorous set of tasks, including regularly scheduled safety meetings, joint planning with NW Permanente and Permanente Dental Associates, safety conversation training, awareness plans and a safety promotion event during the year. Of the 16 facilities that rose to the challenge, nine met all of the qualifications. The region ended the year with a 4 percent reduction in accepted claims compared with 2013. Leonard Hayes, regional EVS manager, won the individual award for his work, which contributed to the East service area’s EVS team going injury-free for the last four years.

The regional LMP council has set a 2014 Performance Sharing Program (PSP) goal to power up unit-based teams’ achievements on improving affordability. When at least 50 percent of a medical center’s UBTs complete a project that saves money or improves revenue capture—and if the region meets its financial goals—eligible employees and managers there will get a boost in their bonus. “Imagine how powerful it will be to have a majority of unit-based teams achieving measurable cost-savings and revenue-capture improvements,” says Josh Rutkoff, a national coordinator for the Coalition of Kaiser Permanente Unions. “The idea is to take all the strong work on affordability at the front line to a whole new level.”

Imagine how powerful it will be to have a majority of unit-based teams achieving measurable cost-savings and revenue-capture improvements.

52 people found this helpful. Was it helpful to you? YesNo