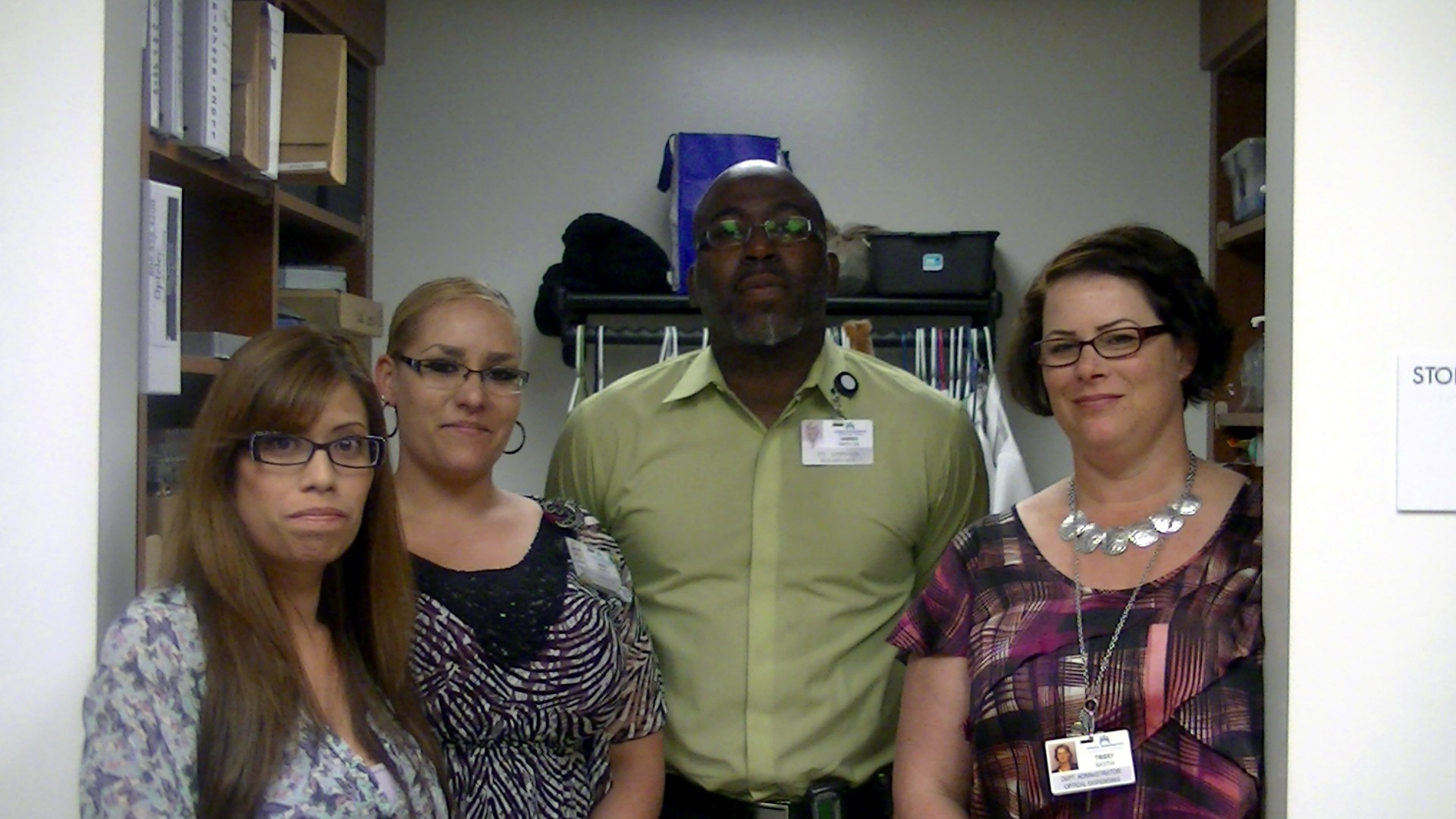 When Webster Parker brought his prescription glasses back to the clinic in Redlands (Southern California), he thought he just needed to replace a lens that had fallen out. But when Parker reported his eye was watering excessively, optician Alicia Rendon spotted a red flag in Parker’s Kaiser Permanente HealthConnect™ record and, within the hour, set up an eye-saving appointment with an ophthalmologist.

“The prescription was fine,” says Rendon, a Teamsters Local 166 member whose unit-based team recently embraced a new workflow, including use of KP’s electronic health record system, to troubleshoot their redos—instances where patients return eyewear purchases. “Once I looked into HealthConnect, there was this big stop sign.”

Her review of the record suggested that Parker, 85, might need a common surgical procedure to lower the intraocular pressure in his right eye, a condition often associated with glaucoma. An old eye injury exacerbated the problem, and Parker’s ophthalmologist had set up a flag in the system to watch for changes to the eye.

“I had surgery that week,” says Parker, a retired pharmacist who once ran a drugstore with his pharmacist wife. “The eye feels better. It feels normal. They did a wonderful job.”

Looking at the whole system

Focusing on redos not only saves KP in terms of the cost of materials and labor but also helps improve service scores. By bringing in ophthalmologists and optometrists, who examine eyes to treat disease as well as prescribe the lenses that opticians dispense, the team could better identify redos linked to eye-health problems rather than product defects—as in Parker’s case.

But opticians, used to handling paper charts and focusing on frame styles, were reluctant to try one of the team’s first tests of change: using KP HealthConnect to rule out medical reasons for unsatisfactory eyeglasses.

“We got buy-in” to overcome the initial resistance, says management co-lead Darren Smith, site supervisor for optical dispensing and a former optician. “It takes just two or three to really commit and spread the practice. Now, it’s not just a retail store where you come and buy something. Here, we are talking about your health.”

To protect patient privacy, opticians' access in HealthConnect was mostly limited to conditions related to eyeglasses' prescriptions rather than a broader range of eye issues. Now the optometrists and ophthalmologists help the optical UBT members spot problems and counsel patients on practices that will protect their eyesight and enhance their eye care.

“Not everyone is going to be able to see 20/20,” says Trissy Bastin, business line manager for Vision Essentials. She directs the service area’s five optical clinics and serves as sponsor for the UBT. “The patients have to be reminded of that. You have to be able to see what kind of eye conditions they have.”

Parker has been a KP member for just seven years. But three decades in the health care industry fostered his appreciation for the electronic patient record—and cooperation and coordination among caregivers.

“What makes Kaiser special is that any doctor can have your complete record at his fingertips,” Parker says. “They can track problems and make recommendations.”

I had surgery that week. The eye feels better. It feels normal. They did a wonderful job.

Webster Parker
Retired pharmacist
23 people found this helpful. Was it helpful to you? YesNo