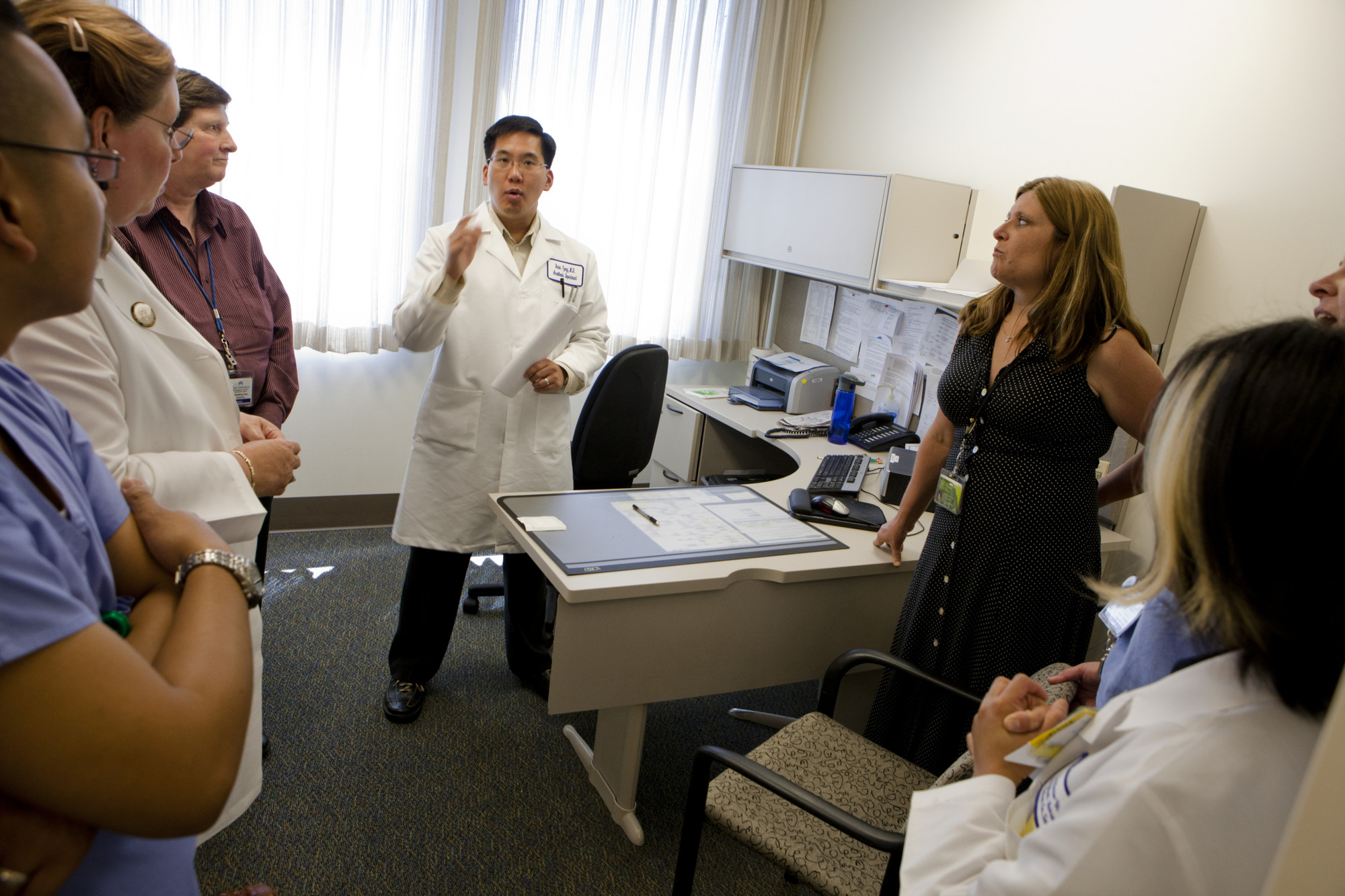 Dr. Brian Tzeng helped lead the effort to streamline the process for patients getting surgery.

What happens when teams truly walk a mile in their patients’ shoes? They often discover their own actions are making that mile a rocky one for patients—and as a result make huge breakthroughs in the way they deliver care.

In the case of South San Francisco’s multidepartmental pre-admission team, observing their processes from the other side of the gurney spurred them to dramatically streamline the pre-surgery and admitting process for patients. With the member at the forefront of their thinking, the team members turned a two-inch-thick packet of confusing, redundant information into a streamlined, one-page checklist. And a funny thing happened—while redesigning the process to help patients, the team improved the way it works.

“Patients would often get confused and weren’t sure what the next step in the process was,” says Brian Tzeng, MD, the Peri-operative Medicine director. “We realized we didn’t have a clear path for the patient to follow.”

Other teams throughout Kaiser Permanente are making similar realizations, framing their performance improvement work by asking the question, “What’s best for the patient?” If a possible solution doesn’t work well for the member and patient, then there’s more brainstorming to be done. These teams are taking the Value Compass to heart—organizing their work not just around the four points but examining what they’re doing from the patient’s perspective.

What does that mean for frontline teams? At the San Diego Medical Center, the Emergency Department sees up to 300 patients every 24 hours. Physicians and staff members are always on the go, delivering on the ultimate bottom line—saved lives. What could be more important? Clinical quality is high; patients are seen in a timely manner and the rate of unscheduled return visits is good.

Yet the results of a recent patient satisfaction survey bothered the team. The department scored well overall, but their patients gave it only 63 percent approval on one question: While you were in the Emergency Department, were you kept informed about how long the treatment would take?

Patients would often get confused and weren’t sure what the next step in the process was. We realized we didn’t have a clear path for the patient to follow.

“The stock answer is, ‘We’re too busy, we don’t have time,’” says Jamie Capon, RN, a member of UNAC/UHCP and the UBT labor co-lead. “But that’s not an answer.”

The UBT members talked about barriers to patient communication and brainstormed solutions. Now, Capon says, “The norm for our day is: We make time. Sometimes all it takes is 30 seconds to check back in on a patient who is anxious or waiting for information.”

Because it encourages a sustained, shared focus on the needs of our patients and members, the Value Compass is named in the new National Agreement (scheduled to go into effect Oct. 1) as the way to lead change at Kaiser Permanente. The work of the South San Francisco and San Diego teams illustrates what that looks like in practice.

The seed of the South San Francisco project was planted one evening when surgery scheduler Terry Caballero, a member of SEIU UHW, received a phone call from a friend who needed a ride to the hospital at 6 a.m. the next day. The friend was a single parent with no car.

Caballero wondered why she waited until the last minute to arrange for a ride. The reason was simple: Patients don’t receive their scheduled time to be at the hospital until after 1 p.m. the day before surgery, making it difficult to do advance planning.

“On my way to work I thought what bad timing that was,” Caballero recalls. “That’s when I thought about what we do here at South City. I’m the one who gives patients their arrival times.”

Caballero approached admitting manager Debbie Taylor about bringing up the subject with their unit-based team. As they started discussing it, team members realized the process involved other departments and players, such as the Operating Room and the Peri-operative Medicine Clinic (POM)—which was in the midst of examining its own workflow processes and discovering gaps and issues.

“We quickly found out that we needed to look at the patient experience—from the time of the decision to go to surgery all the way through surgery day and time,” says Cindy Lambdin, nurse manager for POM, which sees patients for pre-surgery labs and visits or evaluations with an anesthesiologist and other care providers.

As the multidisciplinary team took a hard look at the pre-admissions process from the patient’s point of view, they discovered:

The team also discovered that once the decision was made to have surgery, patients received an average of 11 to 15 calls from people in different departments, making it unclear what they were to discuss with whom.

“One of the things that we needed to do was to communicate better with other departments,” explains Lisa Manio-Bibat, RN, the HAS/PACU assistant nurse manager. “Things were getting lost, and there were people not knowing what was happening, and patients were falling through the cracks.”

With representatives from the linked departments, the team worked on an improved one-page checklist for the pre-surgery process and shared it with colleagues for their input.

“We asked them, ‘If you were a patient walking in, would you know what to do?’” Taylor says.

After many changes and multiple versions, the team settled on a clear, self-explanatory document that features:

Now, when the day of surgery arrives, there are no mysteries, no surprises and no missing information to delay a surgery or even force a cancellation.

The revamped pre-admission checklist and related protocol changes also have resulted in significant, measurable efficiencies. Before they went into use, only 20 percent of South San Francisco surgery patients were confirmed “pre-admitted” 24 hours before surgery—which means all labs have been done and other requirements have been met. Now, the admissions team confirms 80 percent of patients as pre-admitted 24 hours before surgery. Furthermore, the department’s completeness and accuracy of admissions rate has hit 99.4 percent.

And the checklist, which went into use in early July, is getting rave reviews from patients.

The experience in the San Diego ED unfolded differently. There, the first step was to understand the statistic they were looking at.

“A lot of staff didn’t know what was asked in these (patient satisfaction) surveys,” says Margarita Roxas, RN, an assistant department administrator and co-lead of the day-shift UBT—and many didn’t know that a portion of their Performance Sharing Program (PSP) incentives were tied to their outpatient satisfaction scores.

“That got their attention,” she adds—and team members, hoping to turn the scores on that particular question around, agreed to focus on what matters most to patients and keep them informed on four elements of care:

As with South San Francisco, some of the important changes came about by improving communication among staff members and departments. For instance, it was difficult to get information from radiology, laboratory and other departments about how long it would take them to see a patient or turn around a test.

Team members discovered a solution in KP HealthConnect. By checking that system’s “diagnostic lag time” memo section, ED staff members can get real-time estimates of wait times for all departments they work with. The staff also started to use text pagers to get physicians’ estimates of how long it would be before a patient will be seen.

At the same time, the evening shift unit-based team closed another gap in communications—the fact that many frontline workers don’t have access to a PC and Lotus Notes email. The nine-member evening shift UBT solved the problem by obtaining iNotes, a more accessible version of Lotus, for all employees on all shifts—286 people—and got everyone trained and the new system implemented in just 45 days.

“Communication is much better in the department, and our patient flow is better, too,” says Melody Yturralde, RN, a member of UNAC/UHCP and the labor co-lead of the evening shift UBT. “We spend less time looking around or calling for people in the department and can spend more time with patients.”

In July, the day team began asking patients to complete a short survey rating their care on the four elements of informed care before leaving the department. The results: Scores jumped from 63 percent to 77 percent in just 18 days. That was just 3 points short of their ambitious goal and helped lift the department to be one of the top three EDs in Southern California for keeping patients informed.

In South San Francisco, Dr. Brian Tzeng, who’s an anesthesiologist, and others on the team say that working on the project through the unit-based team allowed them to understand each others’ roles and responsibilities better—and also gave them an opportunity to hear and contribute an opinion from that perspective.

“One of the great benefits of this group was it was an outlet for multiple providers at different levels to voice their concerns and actually be heard,” Dr. Tzeng explains. “The greatest frustration for many individuals is we all had great ideas but didn’t know how to make that happen. We realized through this group we had a means to make those changes.”

Dr. Tzeng is certain the team’s accomplishments are the result of every team member’s commitment to working out the best solution in the patient’s best interest. There were no politics, just concern for the member.

“To us, this is not a job,” says Debbie Taylor. “We come here to serve a patient.”

37 people found this helpful. Was it helpful to you? YesNo