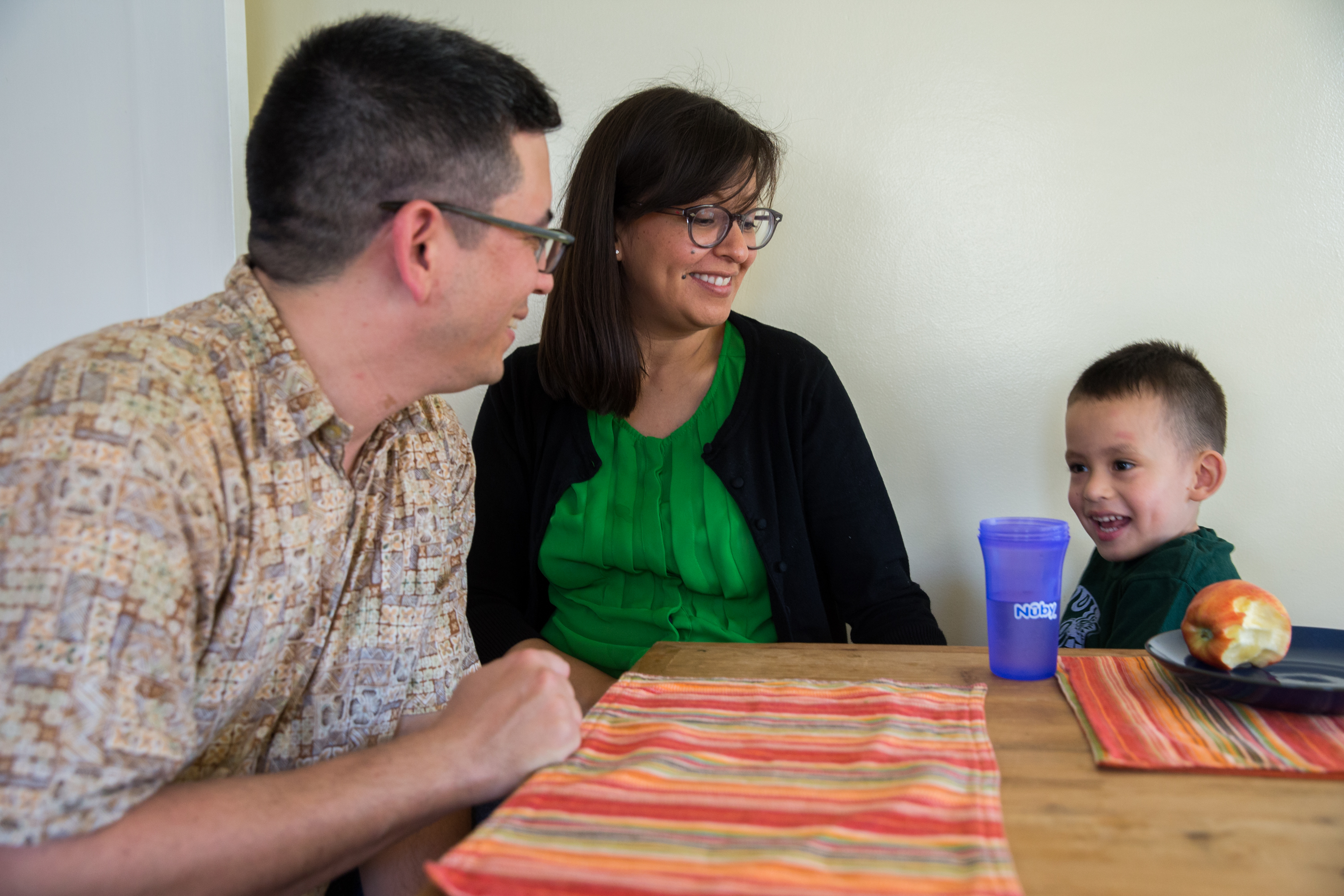 Teo's stay in the NICU after he was born led dad Trav Ichinose to become an active member of the team's parent advisory council, contributing his voice to improving performance.

How UBTs are listening to members

On her last day at work before going on maternity leave, something started going wrong with Juanita Ichinose’s pregnancy—and she found herself in an ambulance, on her way to the Downey Medical Center. Her husband, Trav, followed in his car. The images from an ultrasound foretold a grim story: Juanita was expecting twins, but one of the boys was not moving. “Code Pink” began blaring from the overhead speakers as she was wheeled to the operating room. What caregivers and the family feared came to pass. One twin survived, but the other did not.

“We had some moments with our other son,” says Trav Ichinose. “Then I went to see Teo. He weighed a pound and a half. The doctor told me, ‘He is very small.’”

Thus began Teo Ichinose’s four-month stay in the neonatal intensive care unit, a journey that led his father to become an active member of the department’s parent advisory council. Today, Teo is a happy 4-year-old, obsessed with his toy airplane from the latest Disney movie. And his father continues to bring the voice of the patient to Downey’s NICU unit-based team, where his input has helped shape numerous improvements.

UBTs exist to include all voices—employees, managers and physicians—in efforts to improve performance. And some UBTs are bringing in one more crucial voice: the patient’s.

To be sure, there are UBT members who resist. Objections range from “we don’t have time” to “patients can’t possibly know how our department runs.” But for others, it is a step that literally brings the patient-and-member focus of the Value Compass to life.

“UBTs have a lot of expertise. They know what is and isn’t working,” says Hannah King, director for service quality for unit-based teams. “What is missing is the perspective of the user, someone who might be afraid or in pain. We don’t know what they go through before and after they come to us. So we need to ask.”

Read on to see how UBTs have included patients and members in their work and improved performance.

Whose handoff is this, anyhow?
Downey NICU finds a way to keep parents involved during shift changes

During his son’s four-month stay in the NICU, Trav Ichinose became concerned that parents were prevented from visiting during shift changes, when the Nurse Knowledge Exchange Plus occurs.

“Parents want to maximize their time with their babies, and the policy was undermining that,” he says.

Nurses wanted to integrate parents into the process but also needed to prevent interruptions. “During the report, the parents tended to interject,” says Marnie Morales, RN, the team’s union co-lead and a UNAC/UHCP member. “That was a safety issue,” because it is important nurses not get sidetracked.

So, together with Ichinose and the parent advisory council, UBT members devised a system that met the needs of caregivers and parents. There would be “quiet time,” when parents listen and jot down notes while the outgoing nurse updates the incoming nurse. Once they’re done, it’s the parents’ turn to discuss their baby’s care with the nurses.

In testing the process, the nurses realized they needed to be able to discuss sensitive information out of the parents’ earshot—if, for example, there was a domestic violence situation or mental health problems in the family. So they came up with a discreet cue that signals the need to step away.

“The patient is getting better care because there is better communication. Information that wasn’t getting shared before is now,” Morales says. “As nurses, we get so involved with charting that we forget the patient is sitting there. Now, we are explaining as we are doing it because the parent is there watching.”

The change gave the team a boost in its satisfaction scores, which rose from 74 percent in the third quarter of 2012 to 88 percent one year later. It works to maintain the scores by holding refresher trainings with staff.

“With long stays like ours, your emotional resilience is tested to the max,” Ichinose says. “There are things that happen in the NICU setting that can undermine that resilience—or bolster it. Bolstering our ability to take in information, to be physically and emotionally present for the care of our child, affects our satisfaction with the care.”

Why do patients fall when they are in the hospital? Is it because they are elderly? Or under the influence of medications that affect their balance? The leaders, physicians and nurses at the San Diego Medical Center considered a range of possibilities and tried everything in the usual playbook, posting pictures of falling leaves on patient doors and using color-coded armbands to indicate fall risk. But nothing was working.

Then the UBT on the 5 West medical-surgical unit cared for a patient who was a member of the facility’s patient advisory council—and they asked his wife for her opinion. She said her husband—normally a self-sufficient, strong man—was too embarrassed to call a nurse to help him to the bathroom, especially given that he was wearing a flimsy, possibly revealing hospital gown.

That “aha” moment led the UBT to take a new approach: No one walks alone. Instead of trying to figure out who is at risk for falling, caregivers would treat everyone as a fall risk and provide assistance. The pilot program was so successful that it is being spread to the entire hospital. Before the campaign began in November 2012, the hospital had been averaging 16 falls a month. In June 2014, that figure was 3.4 a month.

Seeing the experience through the patient’s eyes was the key to the solution.

“I felt as if I was part of the team, and my input was just as valuable as any other member’s,” says Pat, the patient’s wife (last name withheld at her request). “If you go to patients with the attitude that they will be helping you do your job better, you will get an honest evaluation of what can be done to help, and they can make your job easier and more rewarding.”

Reluctant to change?
Some ideas for including patients as part of a UBT

Sheryl Almendrez, the management co-lead of the Definitive Observation Unit (also called a step-down unit) at the San Diego Medical Center, acknowledges that caregivers on her team were hesitant to have a patient join its improvement work: “They were interested, but were they ready to hear ‘the real truth’?” And what if a chronic complainer ate up valuable time?

As it turns out, there was little to fear. Patients’ requests were reasonable. For example, they want nurses to give them a heads-up when using an ear thermometer. “We’re used to it,” says Almendrez, but they may not know what it is. “They may think it’s an injection coming at them.”

For the Urgent Care unit in Largo, Md., listening to patients’ feedback about long wait times when coming in with a sore throat led that UBT to work with colleagues in the lab to fast-track tests for strep throat.

“Our team was very hesitant about bringing a member in because there could be more complaints than real feedback,” says Donna Fraser, RN, the team’s union co-lead and a member of UFCW Local 400. Making it clear why it was including patients helped: “We told the patient that we want to know what we are doing wrong, because how else will we improve?”

Morales of the Downey NICU says she no longer flinches from criticism, whether or not it’s phrased “constructively.”

“Some of the people we have on our advisory council are the ones who complained the most,” she says. “You know what? They became the advocates for all the other babies. They helped us change a lot of things on our unit for the better.”

The patient is getting better care because there is better communication. Information that wasn’t getting shared before is now.

drop in average number of monthly patient falls after medical-surgical unit in San Diego adopted "no one walks alone" program.

45 people found this helpful. Was it helpful to you? YesNo