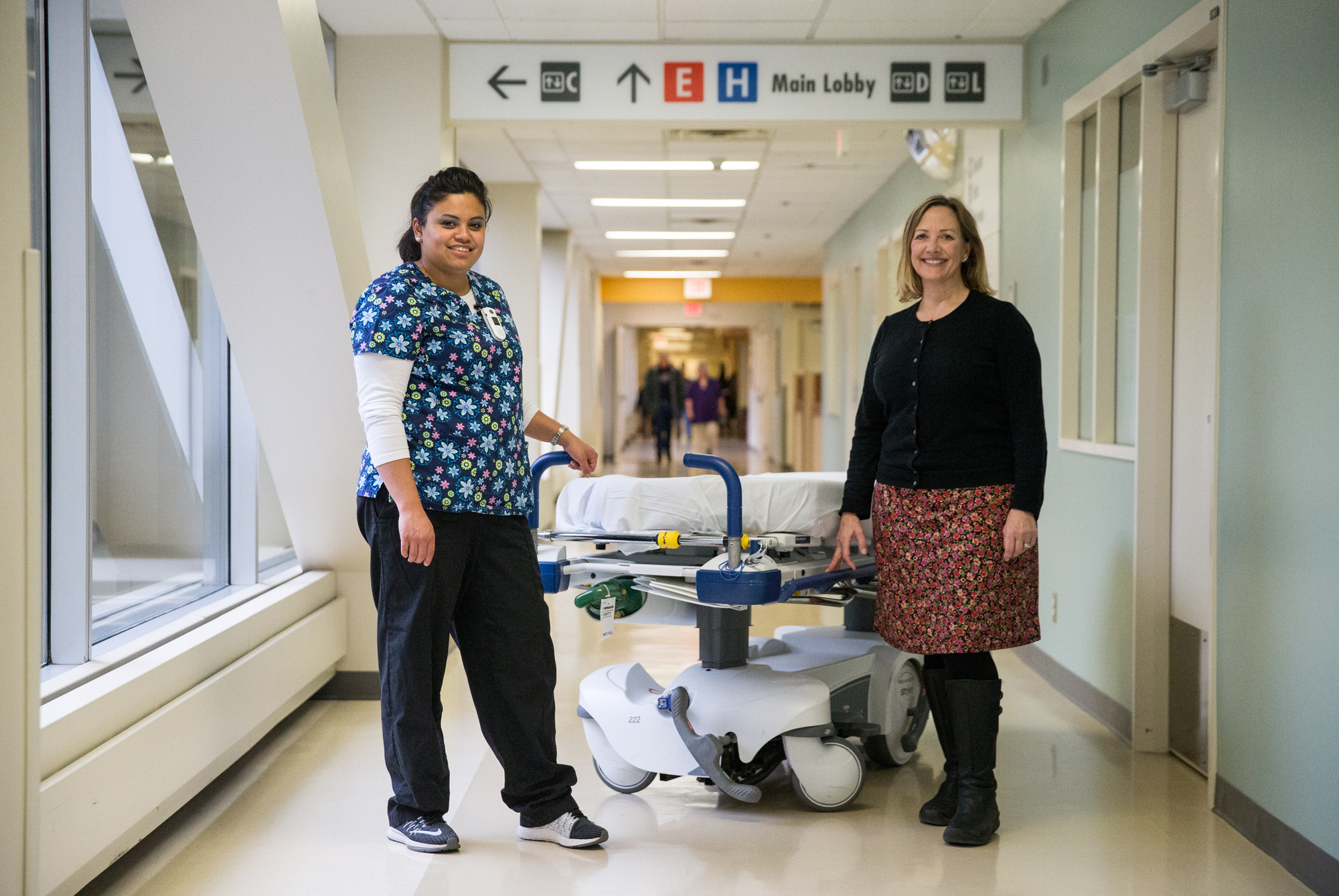 Problems piled up so much that transporters were keeping patients waiting too long. At left, Esther Logan, a transport CNA and member of SEIU Local 49, and Marta Witsoe (right), patient transport manager  participated in the issue resolution process that led to beefed-up staffing.

Patient transportation workers at Sunnyside Medical Center in Portland were in a tough spot: No matter how hard they scrambled, they were constantly running late to pick up patients.

Some of the challenges were clear. The transport workers, members of SEIU Local 49, are qualified to backfill certified nursing assistant positions—and short-staffed nursing units were calling on them to do just that.

In addition, a new computer-based dispatch system had automated patient transfer requests but required fewer dispatchers. The resulting staff upheaval, along with rumors about changes to their certification requirements, threw the unit-based team into turmoil.

Amid frustration and mounting delays—the team was only infrequently meeting its goal of getting to the patient within 15 minutes—improvement advisor Lolita Burnette worked with the team to resolve its issues. To better understand its challenges, she created a process map of the team’s workflow. That turned up a variety of obstacles that were thwarting efforts to improve times.

“Shadowing the team was an eye-opener. We discovered issues that were immediately actionable,” says Burnette. Because of the complexity of the situation, team members called for an issue resolution to identify solutions.

“My staff are really concerned about their patients. They had valid concerns about what was hindering our on-time performance,” says Marta Witsoe, the team’s management co-lead.

The issue resolution took place from July to September last year and helped further identify issues that were impacting on-time performance, as well as showing how delays affected imaging appointments and patient satisfaction.

As it tracked the source of delays, the team discovered that often, the patient was not ready to be moved when transporters arrived. The patient might need a different gown for imaging, or needed to take medications before being moved. Making matters worse, nurses and other staff members had gotten accustomed to transport arriving late and often put in orders ahead of time. But if the transport person arrived on time, the resulting delay had a domino effect, making it more difficult to be on time for subsequent transport requests.

As a result of the issue resolution, the team is partnering with other units to become more efficient. Several improvements are being worked on simultaneously to increase productivity and overall satisfaction—and the team is confident the changes will lead to improved metrics.

In perhaps the most significant change, hospital leadership agreed to hire additional transport staff. The new positions are dedicated to support the Emergency Department, a frequent source of patient transfer requests.

“With time and commitment,” says Esther Logan, the team’s union co-lead, “we agreed upon issues that needed to be addressed within the department.”

Olivia Devers, a labor partner with SEIU Local 49, added, “This IR process was the most positive that I have witnessed in many years—the team and management worked in true partnership from start to finish.”