When the Going Gets Tough, Teams Need Tools 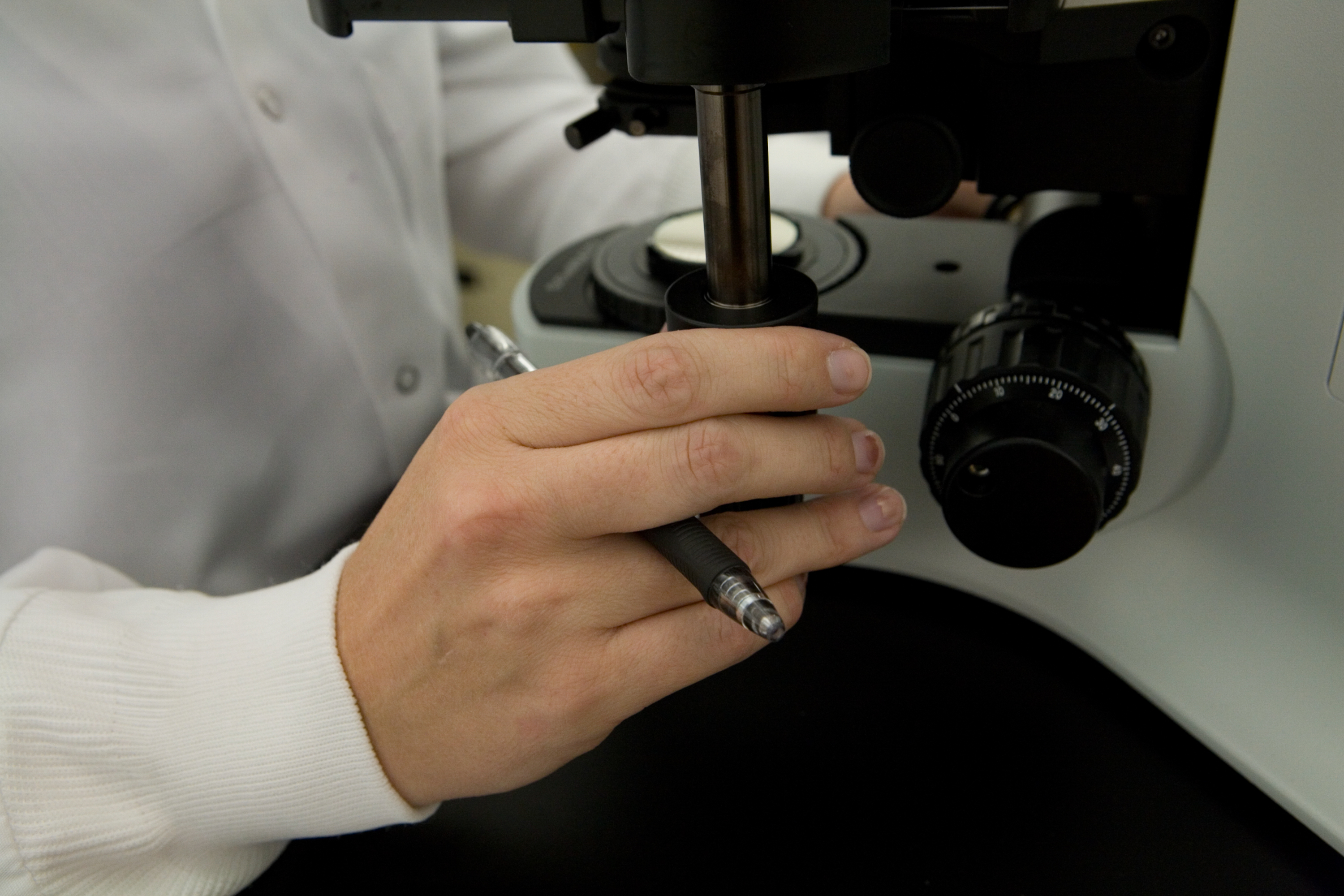 Huddles can give teams the opportunity to get good at solving problems together.

Hemaxi Khalashi isn’t afraid of strange smells. As a clinical lab scientist, her nose is in all kinds of odd odors. But the stench that filled her corner of the Northern California Regional Lab one recent morning put her and many of the other lab workers on edge.

“It was like a bad, old gassy smell, or something deteriorating,” Khalashi said. “I asked my supervisor to walk with me to that corner of the room and asked her what she smelled, and she said, ‘Something dead—rotten.’”

The lab employees quickly fingered the culprit—a new instrument that tests blood samples for Hepatitis B—but they needed a solution, and fast. Their first step: to huddle.

The 15-minute meeting gave lab workers the chance to air their concerns, and provided managers with the opportunity to let the team know the vendor already had been contacted and would be coming by that day. Khalashi spoke up and asked what could be done, right away, to help those who worked near the machine. The section manager suggested masks, which are always available for lab employees.

“Huddles are usually the starting point for getting something done,” said Larry Ratto, a lab assistant and SEIU UHW-West member whose desk is the rallying spot for such meetings. “They are really good for making immediate change—and they never last more than 15 minutes, tops.”

In short order that morning, an issue that might have caused an undercurrent of anxiety was aired and laid to rest. Lab employees and managers determined test results weren’t being compromised and that the odor, though unpleasant, was harmless—and thanks to the huddle, everyone knew it. They later decided to install an air purifier next to the instrument and developed new procedures for handling its waste. The two steps have mitigated the smell.

The lab workers’ instinct to huddle, which stemmed from a year’s worth of practice, is one shared by many high-performing teams throughout Kaiser Permanente. The most successful unit-based teams, those that improve performance and meet goals, are using huddles regularly and effectively—and not just when a major problem needs to be solved.

Huddles aren’t a substitute for the training and skill-building that members of unit-based teams need as they shift into new ways of working—training and skills that help create the learning environment where frontline workers are engaged in decision making and see the connection between their work and larger, strategic outcomes.

“I see it in our group,” said Denise Ja, microbiology section manager. “Huddles have improved our communication, our camaraderie and our teamwork.”

“The more we know each other and…(have) exchanged our thinking, the more we’ve just connected as human beings—the better we do,” said Edmondson, who led two workshops at this spring’s Union Delegates Conference.  “If we’re friends, I will make that extra little cognitive effort to think, ‘Oh, I wonder why she thinks it’s that way?’ Or, ‘I wonder why she sees it that way?’”

The willingness to extend that extra effort can make a world of difference in solving problems, creating a healthy work environment—and improving patient outcomes.

Many shapes and sizes

In Northern and Southern California, 79 percent of high-performing UBTs were huddling as of November 2009. Just 30 percent of newly established teams were doing the same. Once a team has gotten trained in the Rapid Improvement Model and other fundamental techniques, huddles can be an addition that helps improve working relationships.

Huddles mean different things to different departments. Some teams meet daily; others do it weekly. Many departments convene at the same time and same place; others are more spontaneous. Most huddles are short.

Part of what makes huddles effective is that they create frequent, regular opportunities for all the members of the unit-based team—the people whose work naturally draws them together—to come together and contribute ideas.

And they have a casualness that makes even the most reticent team member comfortable speaking up.

“I think because we’re close together in physical proximity, people feel less inhibited,” Ja said. She finds that in more formal meetings, some team members hold back. But when the team huddles in the work area, she said, “It’s kind of a hustle-bustle, and people are anxious to put their two cents in.”

Ja’s team usually huddles every Friday. But during the height of the H1N1 epidemic, the number of specimens the lab handled skyrocketed from 30 to 900 per day, and the team resorted to meeting daily and sometimes even hourly.

As team members worked frantically to devise a new system for tracking samples, the huddles became the place to test new ideas. It was in a huddle that someone suggested a coding system using letters, but the team quickly ran through the alphabet. The team members huddled and re-huddled until they were using a combination of letters, dates and numbers.

Huddles helped the lab workers keep up with the onslaught of work, pulling off what had seemed impossible.

Even teams whose members don’t all work in the same location find that huddling works.

Colorado’s asthma care coordinators are spread out across the region, and usually see each other only two or three times a month. But when the department of seven launched a big push to improve the refill rate of an asthma control medication among children, team members decided to huddle once a week over the phone.

During their phone chats, which usually ran 30 to 45 minutes, team members related their progress in reaching out to members ages 5 to 17 who had not refilled their prescription in four months. Developing a habit of sharing their best practices, successes and failures with colleagues made the team members more accountable, said Kristie Wuerker-Delange, RN, an asthma care coordinator and member of UFCW Local 7.

“It’s kind of an, ‘Uh oh, I have to get this done because we’re going to talk to everybody, and they are going to want to know what I’ve been doing for the week,’” she said.

During one huddle, for example, asthma care coordinator Cindy Lamb told the team she had found that promoting the convenience of the mail-order pharmacy, giving members the telephone number to the regular pharmacy, and providing the member’s prescription number helped patients get their refills faster.

Within eight months, the refill rate of inhaled corticosteroids leapt nearly 20 percentage points, from 43 percent in March 2009 to 60 percent in January 2010—a feat that would not have taken longer without their huddles, Wuerker-Delange said.

“They kept the team focused on the same goal,” said Lamb, a member of UFCW Local 7.

While other teams have the benefit of simply moseying over to a colleague’s desk, meeting over the phone has its pluses.

“I feel like people open up a bit more,” Wuerker-Delange said. “They are more apt to say a certain thing if someone’s not looking at them.”

For the Family Medicine department at the Culver Marina Medical Offices campus in Southern California, huddles are part of the morning routine, like brushing your teeth after breakfast.

At 8:25 a.m., Department Administrator Barbara Matthews pokes her head into team members’ offices, her cue that it’s time to convene in the hallway. Patients already are beginning to arrive, so huddles rarely last more than five or 10 minutes.

Doctors, nurses, medical assistants—everyone who is working that day—attend. Co-leads use the time to relay who is working, share a workplace safety message, offer service reminders and more.

“I am upset if I can’t make our morning huddles,” said Krystle Harris, a medical assistant and SEIU UHW-West member. “If I am screening a patient and have to miss it, then I’ll ask one of my co-workers, ‘Aw man, what was the huddle about?’”

Matthews said in the beginning it wasn’t easy getting everyone to huddle and some team members still might choose not to attend if given that option.

Other shifts, more subtle but just as significant, are taking place as well. Gene Oppenheim, MD, the physician in charge of the Culver Marina Medical Offices, notes that employees who frequently used to arrive five or 10 minutes late are on time now. Matthews says team members like Harris, who used to say little during meetings, are doing a lot more talking.

That’s a clue that team members are confident their views are valued and they aren’t afraid they may get in trouble for sharing their thoughts—two key characteristics that research shows leads to high performance.

The specialist was booked for quite some time, but Pye called back a week later and sure enough, there was a cancellation.

“I brought it to the huddle to congratulate her,” Harris said. “She went out of her way—and the patient was really happy.”

Harris said she thinks sharing with the team the praise she’s overheard co-workers receiving from a patient helps morale, so she does it whenever she can.

“I am shy and I don’t like to speak around a lot of people,” Harris said. “But I am beginning to speak up and discuss little things that are on my mind. I’m just more comfortable in the huddle setting.”

Have questions about huddling you’d like to bounce off one of the team co-leads interviewed for this article? Email Denise.Ja [at] kp.org, Concepcion.Savoy [at] kp.org, Kristine.Wuerker-Delange [at] kp.org, Deana.L.Parker [at] kp.org or Barbara.J.Matthews [at] kp.org for their thoughts.

Here are some tips to help you get the most out of your huddles.

Some ideas of what to discuss:

—From the Sponsor and Leader Resource Guide for UBTs.

‘Huddles have improved our communication, our camaraderie and our teamwork.’

In high-risk industries—including aviation and high-rise construction as well as health care—surgeon and best-selling author Atul Gawande has found that a good checklist not only specifies common sense safety measures, it also ensures “that people talk to one another about each case, at least just for a minute before starting,” he writes. “[It is] basically a strategy to foster teamwork—a kind of team huddle.”

A major theme of Gawande’s latest book, The Checklist Manifesto: How to Get Things Right, is that the best checklists are not just a top-down set of tasks for others to follow. They’re a tool for better team communication, coordination and inquiry. Read more about using checklists here.

5 people found this helpful. Was it helpful to you? YesNo