Do corporate leaders understand the lives of working people? Some do. In the long history of Kaiser Permanente, several executives—including Henry J. Kaiser himself—worked their way up from poverty. Clifford Keene, MD, was another. In a 1985 interview, he described his roots:

“I came from a very humble family. My father was a factory foreman at best....During the summer I always worked. I sold papers or worked in factories doing minor tasks. Then, when I was fourteen I went to work in the steel industry as a steel construction punk, an apprentice first....I would find myself doing construction all over western New York State. I became a connecter; that is, a person who gets up on the steel and puts it together. I became accustomed to being up in the air and being up high, although I was always frightened of being up in the air. I don't think anyone is not frightened when you're way up in the air and the steel moves. It's a situation that commands your respect and gets your attention, I can tell you. I earned quite good money and continued to do that until I was a sophomore in medical school.”

The experience stayed with him throughout his life. He reflected on it when commenting on a successful infant bowel surgery while serving as a cancer specialist at the University of Michigan State Hospital at the end of the 1930s: 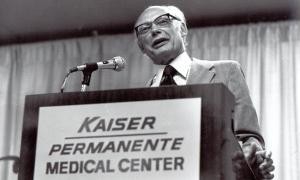 Clifford Keene, MD, then-president and CEO of Kaiser Permanente, at the West L.A. Medical Center dedication in 1974. Dr. Keene had been an Ironworker and member of the International Assn. of Bridge, Ornamental, and Structural Ironworkers, Local 6.

During World War II, Lt. Col. Keene directed several medical facilities in the South Pacific and in the United States, and at the end of the war, KP founding physician Sidney R. Garfield hired him. In 1954, he became the first president and CEO of the Kaiser Foundation Hospitals and Health Plan.

That year, Keene’s dual loyalties came through in an address to the annual Steelworkers convention, when he proudly boasted about labor’s role in demanding affordable health care and KP’s role in providing it:

“In late September of 1946, steelworkers in the San Francisco Bay Area [Pacific Coast Steel Co., Local 1069] selected the Permanente Health Plan as an alternate choice for its members and requested that employers provide payroll deductions for health care. Bethlehem Steel Company disputed their right to make such a decision. The union brought the issue to court. The question was: who, the employer or the workers, has the right to select a prepaid plan when the employer pays the bill? The union won.”

Keene continued to serve Kaiser Permanente for many years, and is remembered for his work defining and implementing the delivery and payment for health care that became known as the “Kaiser experience.” He retired in 1975. On January 25, 2000, he succumbed to Parkinson's disease.

*The terminology of the two trades is often confused, and even Dr. Keene succumbs to this drift: Strictly speaking, steelworkers make steel, ironworkers build with steel.