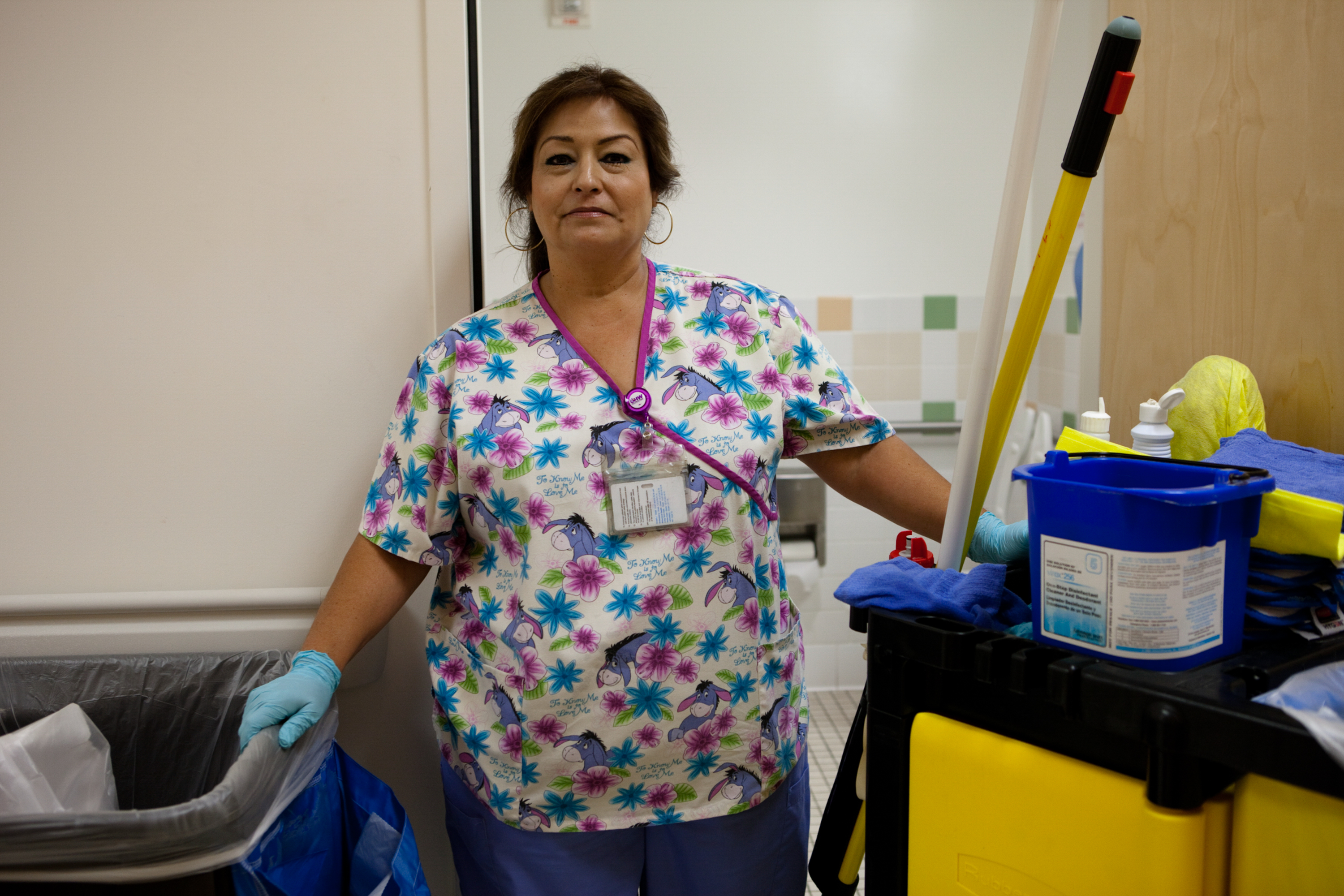 The lady who talks to you from inside your GPS has found a new home, it seems, in the robotic carts deployed in the newly rebuilt Los Angeles Medical Center.

Instead of guiding you to your destination, she’s moving linen and trash along the long hallways and underground tunnels. By herself. Her gentle yet firm computerized voice tells workers in a docking room when the cart is ready to be filled, and sensors ensure she doesn’t run anyone over. She even can detect whether there are passengers in the staff elevators and patiently waits for the next empty one.

The robotic carts reduce wear and tear on the muscles and joints of the medical center’s Environmental Services (EVS) attendants. They are just one example of how managers and union members at this Southern California hospital are taking the lead in improving workplace safety for EVS departments.

Historically, EVS is a high-injury department because the job involves a lot of bending, lifting and moving equipment—not to mention working with hazardous chemicals. But the EVS department at Los Angeles Medical Center made such remarkable progress in reducing workplace injuries in 2009, its members earned a special bonus as part of the Performance Sharing Program (PSP). So did the EVS departments in Riverside and in Panorama City, which boasts the lowest injury rate in the region.

But more important than the good-humored rivalry is the confidence these teams inspire in their counterparts. “They know it can be done,” Covarrubias says.

Even Kaiser Permanente’s oft-stated goal of a workplace free of injuries isn’t as far off as might be thought: The EVS department at the Eastside Service area in the Northwest region hasn’t had a single injury for two straight years. Regionwide, the EVS departments improved their collective injury rate by a remarkable 65 percent for the reporting year ending Sept. 30, 2009.

Management and union co-leads on these successful unit-based teams credit specific safety techniques, such as pre-shift stretching, and better equipment, such as microfiber mops and motorized carts. But they also say the communication and team-building skills they use by working in partnership are crucial to building not only systems of safety, but a culture of safety.

Based on the experiences of successful EVS departments in Southern California and the Northwest, here’s what’s working to improve workplace safety.

Evidence from Sunnyside hospital in the Northwest shows the effect this kind of effort can have. After the injury rate jumped up in the first half of 2009, Curtis Daniels, the medical safety coordinator, challenged UBT members to see how many safety conversations they could have to raise awareness of potential hazards. More than 6,000 conversations were reported in one month alone—and during the second half of 2009, the inpatient teams had only two workplace injuries.

In Southern California, for instance, where there has been a 33 percent reduction of accepted workers’ compensation claims since 2005, the regional Workplace Safety department has built a customized incident investigation database, harnessing data that helps teams spot trends and come up with solutions. The database is only useful because employees are willing to report the injuries they suffer.

“At first, people were afraid,” says Eva Gonzalez, an EVS attendant at Panorama City and an SEIU UHW-West steward. “We assure them there is not going to be a backlash. Incident investigations helped, because people would show us how they got hurt and we let them say what happened. We ask, ‘What do you think we should do differently?’ ”

Ofelia Leon, the day shift supervisor who has worked at Kaiser Permanente for about three years, notes the fear of reporting was not unfounded: “At other (non-KP) hospitals, if you got injured, you got a caution or discipline, so people were afraid to report them.”

Employees also get regular updates about their progress toward their workplace safety goal. “We share information and let our members know where we’re at and where we need to be,” says Edwin Pierre, a 26-year EVS worker at LAMC. A huddle at the beginning of each shift includes a safety tip shared by an employee —creating a climate where workers get accustomed to speaking up and gain confidence that their voices are being heard.

Floor it, safely: To reduce injuries from lifting bulky mop buckets, EVS departments are buying more efficient microfiber mops that don’t require as many trips to empty, are wringerless, and use less water and cleaning solution. To keep those long hallways at LAMC clean while keeping workers safe, the EVS department replaced autoscrubbers with “chariots” that workers ride. “They have improved quality and morale, as well as safety,” says Abraham Villalobos, the hospital’s director of Environmental Services.

Maximize the micro: Microfiber is not just for mops. EVS departments in the Northwest now are using microfiber dusters with extendable handles proven to reduce worker strain. The new dusters also clean 45 percent faster than traditional methods and reduce chemical and water consumption up to 90 percent.

Tamper with hampers: The lids on trash cans and hampers were falling on workers’ arms and causing injuries—so the Panorama City EVS department bought new bins with hydraulic lids. They also put signs above hampers asking staff members not to overload the bins, because too-heavy loads were causing lifting injuries.

In a similar vein, “when needlestick injuries were up, we brought it to the table,” says Rosemary Mercado, an EVS attendant at Panorama City. The unit-based team decided to coach workers to hold the bags away from their bodies when taking them out of the laundry hampers. And they borrowed an idea from colleagues at nearby Woodland Hills Medical Center: They moved the hampers away from the sharps containers.

Take your time, take time off: “Be careful and take your time,” is the advice from Rebeca MacLoughlin, a housekeeper in the Northwest for seven years. Mindful of the link between fagtigue, morale and injuries, building services manager Manuel Covarrubias in Panorama City encourages employees to take time off when they seem to be getting sluggish. “I look for ways to cover people during summer to ensure people with less seniority can get some time off when they really want it,” he says.

Starting with stretching: Without exception, every EVS department that’s been successful at reducing the injury rate starts every shift with stretching. “Sometimes we dance and make it fun,” says Ofelia Leon, the day shift supervisor at Panorama City. The dance music of choice at LAMC is Michael Jackson. “I mean, who can’t dance to Michael Jackson?” wonders Pierre, the Pierre, the LAMC EVS attendant.

The bottom line: Investigating incidents, sharing safety tips, having on-the-spot conversations about working safely: These things are possible in large part because of the communication and team-building foundation fostered by the Labor Management Partnership.

Before, “It was just coming to work, doing whatever, and then leaving,” says Sandra Pena, the EVS labor co-lead at Riverside and United Steelworkers Local 7600 member.

“Now, it’s like there’s feedback back and forth all the time. It’s more of a team.”

“It makes you feel good as an employee to make improvements,” says Eva Gonzalez of Panorama City. “We know our opinions matter. We know we are not talking to the wall.”

Dilcie Parker, the labor co-lead at the LAMC EVS department, recalls how things were in 1999, when partnership started taking hold at her facility. “When we first began meeting, it was, ‘You sit on that side of the table, I sit on this side.’ I once arrived at a meeting and said, ‘I don’t sit next to management.’ You could feel the hate in the room.”

Management co-lead Villalobos doesn’t disagree. “Before, we couldn’t stand each other,” he says. “There was screaming.”

The turnaround, both say, came as a result of the LMP training the whole team received—from mapping root causes to issue resolution—and persistence.

“We started seeing the benefits in better quality and better attendance,” says Abraham Villalobos. “The reduction in injuries didn’t just happen this year. It’s about understanding the things we need. If we don’t get along, we can’t come up with projects to work on.”

This doesn’t mean everyone is holding hands and singing “Kumbaya.”

“There are still issues we disagree about,” says Parker. “But before, we used to get nothing solved. Now, issues get solved and they are off the table.” Recently, Parker, Villalobos and the team were in a meeting, crammed together in a tiny conference. The woman who once refused to even sit next to a manager found herself saying, “Look, Abraham, we’re actually touching.”

17 people found this helpful. Was it helpful to you? YesNo