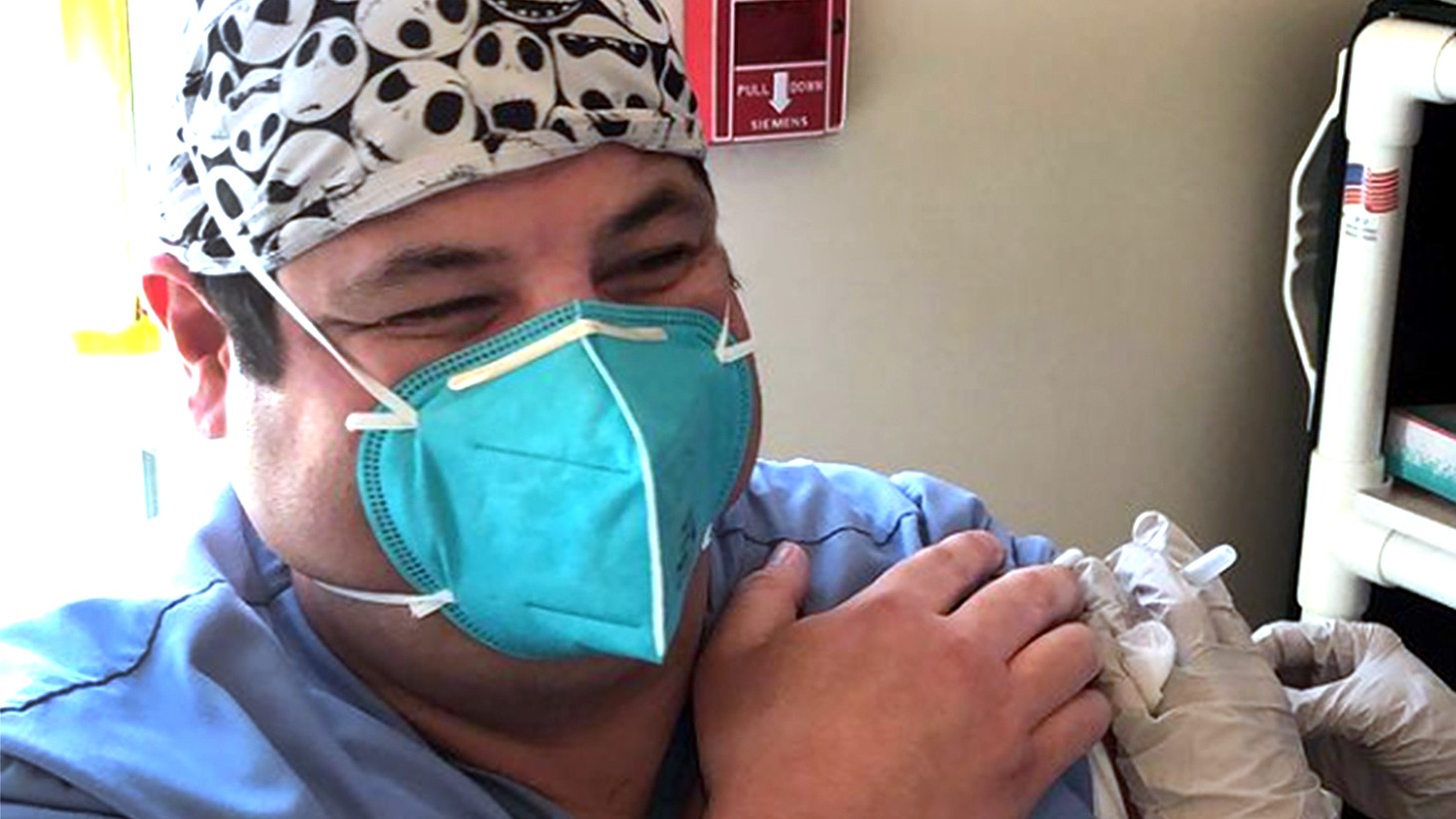 SEIU-UHW member Gabriel Montoya got his vaccine and spearheads efforts to get his fellow union members protected from COVID-19.

Building on the Partnership's foundation of trust

Union leaders crunched the numbers, and they didn’t like what they saw.

At the beginning of February, less than 50% of SEIU-UHW members at Kaiser Permanente were vaccinated against COVID-19. It was even worse for employees in the Emergency Department at Downey Medical Center in Southern California, where Gabriel Montoya works as an emergency medical technician. There, only 40% of his fellow union members got the shot.

Montoya and his fellow union members — working with physicians and managers — wanted to raise those rates, so they pulled together labor-doctor huddles. And by mid-April, 64% were vaccinated.

“We did it in partnership,” says Montoya. “The labor partners led the huddles and introduced the doctors. I can’t imagine that happening in a nonunion hospital or even a non-Partnership hospital.”

SEIU-UHW members set up a phone bank to call — in Spanish and English — members who worked in housekeeping, food service and central supply departments, where vaccination rates were lowest. The union also hosted a Facebook live event where Black and Latino KP doctors answered questions.

Those proved so popular that they wondered, why not do this live at the facilities?

Angela Glasper loved the idea. The chief shop steward at Antioch Medical Center in Northern California got frustrated when she talked to fellow union members who were conflicted about getting vaccinated.

“I listened, but I couldn’t address their concerns,” says Glasper, who works in optical sales and needed someone with the clinical expertise to answer their questions. “Wouldn’t you rather hear it from a doctor than me?” she asks, with a hearty guffaw. “People would say to the doctors, ‘Labor has been telling us about it, but you answered our questions.’”

One of the most popular doctors at the huddles in Antioch was Jeffrey Ghassemi, MD, an anesthesiologist. He shared his harrowing stories about working on the COVID units and was, in Glasper’s words, “patient and gentle.” With a newfound confidence, employees signed up for vaccine appointments during huddles.

Pediatrician Carol Ishimatsu, MD, who volunteered to talk at a huddle in Downey, has given children shots to prevent measles, mumps and chickenpox for more than 2 decades.

“Vaccines are our most important intervention,” says Dr. Ishimatsu.

To build trust, Dr. Ishimatsu emphasized her shared experience with SEIU-UHW members as warriors on the front line.

“I told the employees: I do the same thing you do after work,” she says, describing her ritual of removing her clothes in the garage and putting them directly in the washing machine before entering the house. “We are in different professions, doing the same thing.”

“I encouraged the staff to be honest, relate their fears and doubts, anything holding them back,” he says. “And they really opened up.”

The trust and open communication cultivated by working in partnership were key to building vaccine confidence.

“Working in partnership has intensified during the pandemic,” says Valenciano, “because people realize we need to work together.”

Dr. Ishimatsu agrees. She was involved with the Labor Management Partnership when it started more than 20 years ago. “At the time, I wasn’t sure it would evolve,” she recalls. “It treats us like one big family, instead of segments. The thing that keeps one person safe, keeps everyone safe.”

Want to activate doctor-labor huddles at your facility? Download this tip sheet to learn how to do it.

An analysis of Kaiser Permanente members in Northern California early in the COVID-19 pandemic found racial and ethnic disparities in the likelihood of testing positive for the coronavirus. In response, KP created a vaccine equity toolkit.

In addition, KP created 2 websites and social media hashtags that community partners could use reach out to Black and Latino patients: