For the Love of Kids 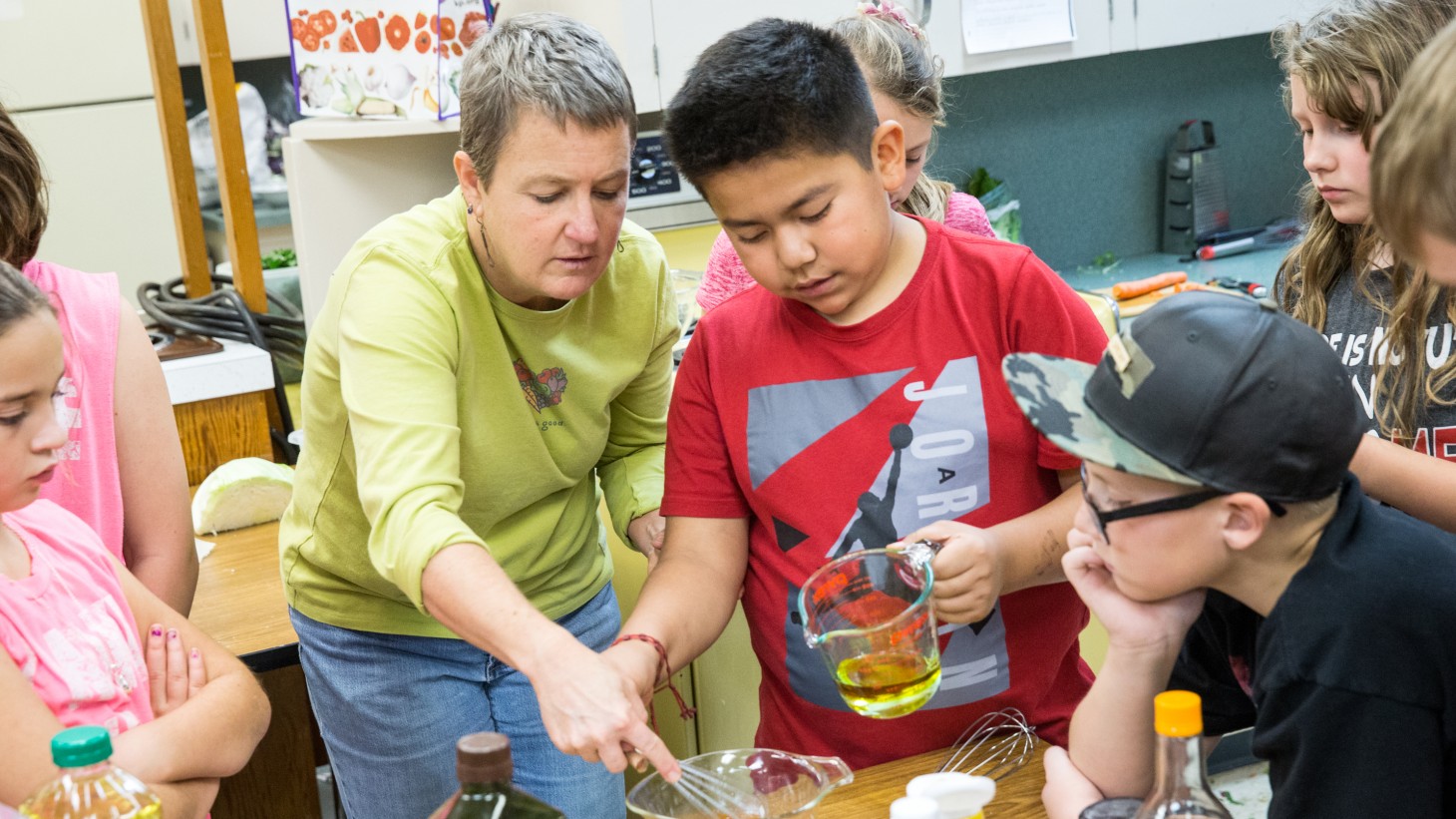 A farm-to-table program in a low-income neighborhood

On a warm fall afternoon, nearly 35 children are bouncing off the walls as they get ready to leave the classroom and head out to their elementary school’s garden. They’re all members of an after-school garden club and cooking class called Edible Olympic. It’s the brainchild of Maria Peyer, an oncology nurse and team co-lead at the Longview Kelso Medical Office in Kaiser Permanente’s Northwest region and her husband, elementary school teacher Michael Bixby.

The kids can barely contain their excitement as Bixby tries to calm them down so they can listen to the afternoon’s agenda.

“The sooner you settle down and be quiet, the quicker I can finish what I need to say and you can get outside,” he implores the class.

Quickly, the hubbub settles. Bixby goes over what needs to be done: plant blueberry bushes, dig a hole for a tree, and remove bamboo sticks. He also reviews the Garden Guidelines, which include listening with respect, walking (no running) in the garden, and asking for permission before picking anything. Then he asks, “Whose garden is it?” and gets a resounding and loud, “Ours!” as everyone heads outside to get to work.

The students attend Olympic Elementary School in Longview, Washington. They don’t have many advantages: More than 20 percent of the city’s population is below the federal poverty line, and 90 percent of the school’s students participate in the free or reduced-price lunch program. Many experience food insecurity regularly, not knowing if they’ll have enough—or any—food to eat.

There are well-documented health disparities related to low income, and these kids are at risk. Edible Olympic is helping address that vulnerability, teaching the kids about healthy food and how to prepare it, laying the foundation for good eating habits that last a lifetime. It’s an example of how partnership principles expand naturally and necessarily into the community; the new 2015 National Agreement includes commitments to jointly work on improving the health of the communities we serve.

The Longview project grew out of a Kaiser Permanente adult cooking class recommended for oncology patients, one that focuses on a plant-based diet. Peyer says that after moving to Longview, she and her husband were struck by the limited resources available to the children in the community.

“We wanted to affect change as directly as possible,” says Peyer, an OFNHP/ONA member. “So we dove headfirst into Edible Olympic. We didn’t want to spend time in meetings, we just wanted to get in the dirt and the kitchen—and that’s what we did.”

“The kids, their parents and the greater community have embraced the efforts and confirmed that our hunches were right,” Peyer says.  “Good, healthy, real food, prepared simply, with love and in community, can be life transforming.”

Members of the Oncology unit-based team are supporting the project, too, donating money and time; four KP employees help staff the cooking class.

“Volunteering in the community gives us at KP a chance to share our skills and our approach to supporting good health,” says Elizabeth Engberg, the Northwest’s Thriving Schools program manager. “It also helps us learn about our members—where they live, work, learn and play, because that’s a huge part of what affects their health. Schools are the best place to do this.”

The 2015 National Agreement between Kaiser Permanente and the Coalition of KP Unions calls for union engagement in Community Benefit programs; stay tuned for more opportunities. In the meantime, you can:

The program has had overwhelming and unexpected participation.

“The idea was that this project would launch with eight to 10 kids. We had 60 kids come to the information session,” Peyer says, which prompted an instant expansion from one to two sessions. The kids work in the garden on Thursday afternoons, and on Fridays, they walk across the field to the middle school, where they are able to use the home economics classroom for cooking class. The sessions run for five weeks and end with a celebration where the kids cook a complete meal and share with their friends and family.

The first session got under way last spring. A grassy patch of the school’s property was selected as the site for the garden, and the children got seeds started indoors. As weather allowed, the ground was prepared. While they waited for their seedlings to be ready to plant, the kids were introduced to kitchen safety and how to prepare the food they were just beginning to grow.

In the cooking class, kids have a healthy snack, then work in small groups to prepare the dish of the week. When the cooking is done, they gather together  and enjoy their meal. The kids leave with a bag of groceries so they can cook the meal at home.

“In some cases, this may be the healthiest meal the family may eat during the week,” Peyer says.

On that fall day out in the garden, the kids in the second session organized quickly after studying the garden map Bixby brought along for reference. They divided themselves into groups and got to work with shovels, buckets and plants to complete the day’s activities.

One of the choices they faced was whether to extend the blueberries to the fence or stop a few feet in to allow for a foot path. Several kids piped up with ideas. The decision got made after 11-year-old Christian Aguibar offered his opinion.

“We can grow more things if we don’t have a walkway,” Christian said, “so let’s not have one.”

We wanted to affect change as directly as possible. So we dove headfirst into Edible Olympic. We didn’t want to spend time in meetings, we just wanted to get in the dirt and the kitchen—and that’s what we did.

48 people found this helpful. Was it helpful to you? YesNo