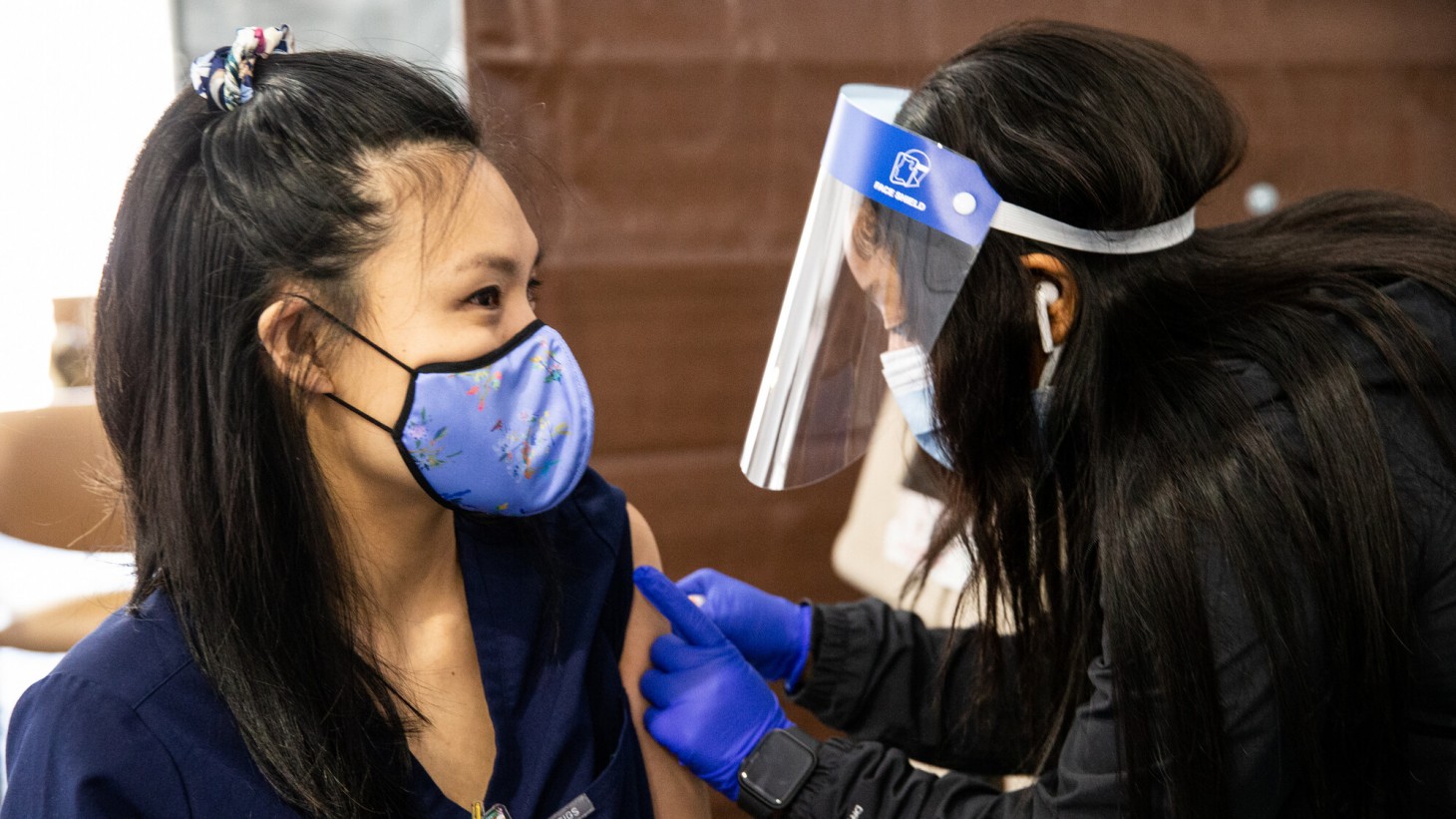 Taking our shots: Collaborative efforts between labor and management, such as at this Kaiser Permanente vaccination tent in Northern California have helped increase COVID-19 vaccinations. Alia Easy, an LVN and member of SEIU-UHW, gives pediatrician Dr. Christabelle Co her vaccine.

Teaming up to combat COVID-19

As we move toward the “next normal,” the Labor Management Partnership has played a key part in supporting COVID-19 vaccinations.

Frontline workers, doctors and managers have come together to get shots in arms. These fruitful collaborations point the way forward as Kaiser Permanente and the Partnership unions work to transform fear into confidence, confusion into clarity, and hesitancy into bold action.

Look at the data

A joint effort between SEIU-UHW and physicians pushed vaccination rates of the union’s members from less than 50% all the way up to 64% within 3 months. It began when union leaders crunched the numbers — and didn’t like what they saw.

At the beginning of February, less than half of SEIU-UHW members at Kaiser Permanente were vaccinated against COVID-19. For instance, only 40% of union employees were vaccinated in the Emergency Department at Downey Medical Center in Southern California, where Gabriel Montoya works as an emergency medical technician.

Montoya and his fellow union members — working with physicians and managers — wanted to raise those rates, so they pulled together labor-doctor huddles. Union members were scared, confused and hesitant.

At first, they considered joint physician-labor rounding. But they realized being in patient areas wouldn’t support those conversations, so they pivoted to huddles — short, informal team meetings.

Carol Ishimatsu, MD, a pediatrician with the Southern California Permanente Medical Group, was one of the first doctors to join a huddle in Downey.

“Vaccines are our most important intervention,” says Dr. Ishimatsu, who participated in the clinical trials for the shots when they were being tested.

To build trust, Dr. Ishimatsu emphasized her shared experience with SEIU-UHW members as warriors on the front line. “I told the employees: I do the same thing you do after work,” she says, describing her ritual of removing her clothes in the garage and putting them directly in the washing machine before entering the house. “We are in different professions, doing the same thing.”

“I encouraged the staff to be honest, relate their fears and doubts, anything holding them back,” he says. “And they really opened up.”

“We did it in partnership,” says Montoya, the emergency medical technician. “The labor partners led the huddles and introduced the doctors.

I can’t imagine that happening in a nonunion hospital, or even a non-Partnership hospital.”

Even amid the pandemic, caregivers still had to fight the flu. For years, doctors, union members and managers in the Northwest Region have worked together on flu vaccinations. Because of COVID-19, they set up outdoor mass vaccination sites for the 2020 season. It became clear they would have to do something similar when a vaccine against COVID-19 became available.

“We said, ‘Let’s transform the work we are already doing,’” says Joshua Holt, RN, a member of OFNHP who works at Kaiser Permanente Westside Medical Center in Hillsboro, Oregon. The groups used the Rapid Improvement Model, conducting small tests of change in plan, do, study, act cycles to address the gaps.

“There were daily meetings where we were rapidly assessing and making changes and improvement,” says Holt. The years of practice by unit-based teams using performance improvement processes paid off during the crisis.

Kaiser Permanente joined with 3 other health care organizations — which normally would be considered competitors — to run a mass vaccination site at the Oregon Convention Center from January to June 2021.

“It was all about the community,” says Holt. “It was really impressive. We knew there would be some bumps along the road. But having everyone at the table all treated as equals, working together, enabled us to stay focused on our goal: vaccinations for everyone.”

Angela Glasper loved the idea of joining forces with doctors. The chief shop steward for SEIU-UHW at Antioch Medical Center in Northern California got frustrated when she talked to fellow union members who were conflicted about getting vaccinated.

“I listened, but I couldn’t address their concerns,” says Glasper, who works in optical sales and needed someone with clinical expertise to answer their questions. “People would say to the doctors, ‘Labor has been telling us about it, but you answered our questions.’”

One of the most popular doctors at the huddles at Antioch was Jeffrey Ghassemi, MD, an anesthesiologist with The Permanente Medical Group and chief of staff at the hospital. He shared his harrowing stories about working on the COVID-19 units and was, in Glasper’s words, “patient and gentle.” With a newfound confidence, employees signed up for vaccine appointments during huddles.

Dr. Ghassemi says the effort was built on a strong foundation of Labor Management Partnership principles and practices. In his role as an anesthesiologist, he has taken part in performance improvement projects with surgery unit-based teams. “What I learned is that people are people are people,” he says. “You leave your titles at the door and try to solve a problem.”

That insight was his touchstone during the pandemic. “We all play our roles at the hospital, and they are all important,” says Dr. Ghassemi. “Your value is not determined by your title. It’s your objective that matters. And that objective is making lives better.”

Take Action: Get Shots in Arms

Here are 3 ways to build confidence in the COVID-19 vaccines and increase vaccinations: