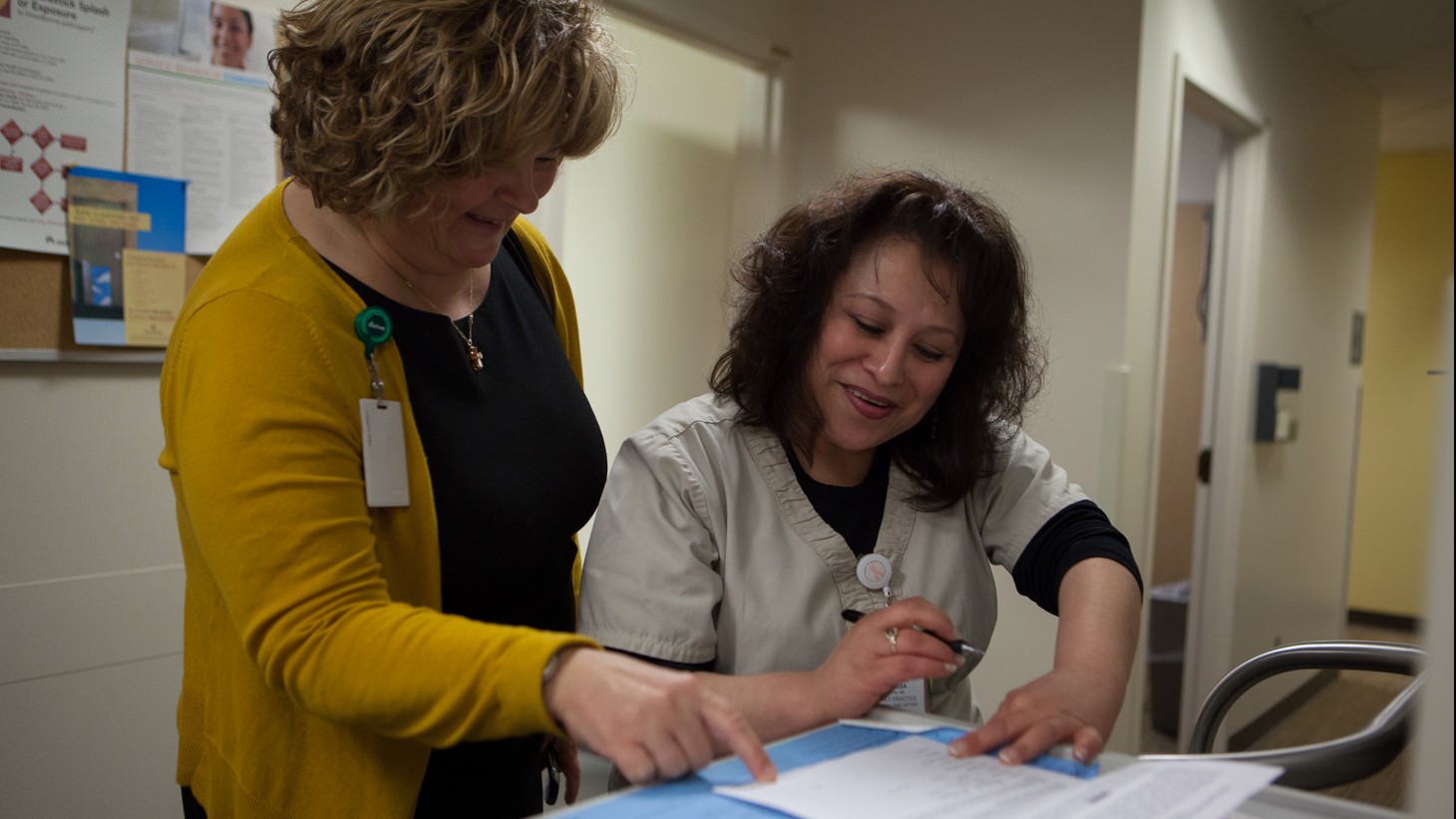 Gena Bailey, a service area director and UBT sponsor in the Northwest, and Melissa Garan, a medical assistant and SEIU Local 49 member

If you ask Los Angeles Medical Center sponsors Ilda Luna and Sanjit Sodhi for the secret to successful sponsorship, they’ll agree it boils down to investment—of time, trust and respect—in each other, in their teams and in the collaborative work process.

Luna, a family medicine receptionist, and Sodhi, the chief financial officer for LAMC, didn’t know each other when they were asked to co-sponsor the Health Information Management, Admitting and Patient Revenue, and the local business office teams—teams that were failing to meet performance goals and were entrenched in mistrust between labor and management.

“Sanjit said, ‘Tell me what I need to do to get us up and running,’ ” recalls Luna, a member of SEIU-UHW. “I said, ‘You need to meet with your teams. If you invest time in labor, you’ll get huge dividends.”

Like most investments, success didn’t happen overnight—and it wasn’t guaranteed. But after a year and a half of perseverance, dedicating time and hard work to supporting the work of those teams, the pair has watched the departments go from being in the red in most metrics to seeing huge improvements in areas like attendance and co-pay collection.

“We’re taking on types of projects that we could never have dreamed of a year ago,” Sodhi says. “And when you work though relationship issues and put the focus back on partnership and performance improvement, it’s highly satisfying.”

What’s so special about sponsors?

A 2011 study by Johns Hopkins University, Rutgers University and Kaiser Permanente identified five key characteristics of high-performing teams, including “consistent, aligned and visible sponsorship.” It confirmed what has been seen throughout the organization—strong sponsorship and support from higher levels of leadership are key factors in a team’s success.

The reasons are straightforward. Many frontline workers say simply having leaders’ involvement and support gives their work validation, letting them know that what they’re working on is important, that their contributions matter. In addition:

“There are teams that need both management and labor sponsors to model partnership behaviors, who can agree to disagree and who can have some healthy courageous conversations till they get to an outcome,” says Vicki Barkan, the UBT consultant at the Los Angeles Medical Center. “Sometimes teams and co-leads haven’t experienced that, so they need to see it. It really helps to further the team dynamics.”

“As sponsors,” she says, “we have the same common goals and mutual respect for each other” that team members should have. “It trickles down to the rest of the UBT.”

“Sponsorship is a way to help move UBTs forward,” says Diane Ochoa, the regional director for Medical Group Support Services in Northern California and a former San Jose Medical Center medical group administrator. “It’s just like having a mentor, somebody you can talk to, to help you with issues and celebrate with you, and be there to really acknowledge the work you’re doing.”

So, what’s the problem?

Yet sponsorship is still a developing area in the partnership structure, even though many regions find that without active union and management sponsors, UBTs’ performance improvement work stalls.

Several challenges get in the way, and chief among those is time. Sponsors repeatedly cite the difficulty of finding time in their regular work to mentor teams. Labor sponsors face the added challenge of needing to cover their duties when they’re away from their usual post, lest those duties fall to colleagues.

Even with a commitment from facility and department leadership to backfill her position when her sponsorship work takes her away from her regular job, Luna, who is the union co-lead for the medical center’s LMP Council, says there isn’t enough time for everything she needs to do.

“But you have to make time,” she says. “I put in my own time, during lunch and after I clock out.”

Luna’s partner Sodhi agrees. The time challenge has to be reckoned with—but it’s a challenge worth solving.

“I’ve definitely made it a priority,” she says. “It was tiring devoting all that time, but I knew that I needed to do that to develop my relationships. In order to achieve any results, I knew I had to invest in time.”

“Capacity” is another word that surfaces when sponsors talk about challenges. Identifying people who can be strong sponsors and ensuring they have the tools and skills for the role is not easy. Labor bears the brunt of this barrier, in part because the unionized workforce typically has a smaller pool of leaders to draw from than management has. Many potential labor sponsors lack the consulting and facilitative skills required to mentor a team. As a result, union sponsors are in short supply, and those few become overwhelmed, with too many teams to support.

“I think that with labor, with so much work to do for our regular jobs, this is too much,” Luna explains. “So a lot of my peers didn’t want to do it. (Or) the ones who want to do it couldn’t get released because of operational needs. Patient care comes first, so operational need is a huge barrier.”

Here are more resources to help your UBT:

Some say successful sponsorship won’t happen until sponsors are held accountable, with their success tied to performance goals and financial compensation.

But in the meantime, many medical centers and regions are wrestling with finding other solutions to these issues. As a first step, some are revamping their training to clarify roles and responsibilities, which many sponsors—both labor and management alike—say have not been clear.

“It will be helpful for people to understand what they are supposed to do and see examples of how that’s done,” Ochoa says. “This is relatively new for some labor folks especially, and the more we can give them the tools to be a good sponsor, we need to do that.”

At the Los Angeles Medical Center, the facility’s LMP Council has made a series of changes in the last year it thinks will help shore up sponsorship. These include establishing criteria for becoming a sponsor, to make sure the right people are in the role and can model partnership and leadership behaviors; aggressively recruiting union co-leads of high-performing teams to become sponsors to increase the labor sponsor pool; and reassigning UBTs so a sponsor has no more than five teams.

Ultimately, time and commitment always will be challenges, but the potential rewards—the culture change and performance improvement work that come with high-performing teams—make the investment worthwhile. If sponsorship remains a barrier, there is a risk that teams will get discouraged.

31 people found this helpful. Was it helpful to you? YesNo