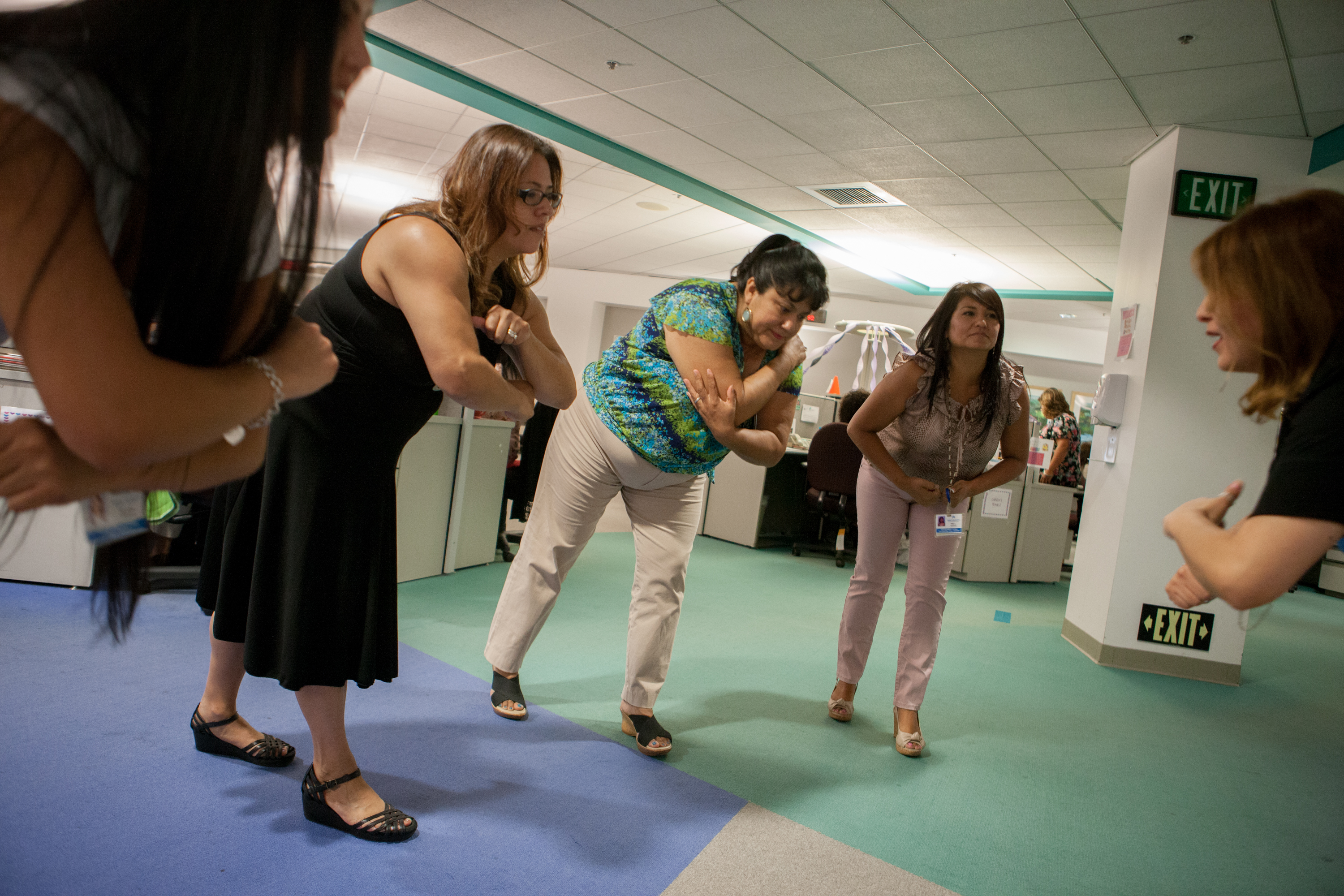 At 10:30 a.m. sharp, South Bay Medical Center appointment clerk Carolina Meza removes her telephone headset. She fires up what looks like the world’s tiniest iPod, attached to a portable speaker that’s not much bigger. She gathers four of her co-workers in a patch of open space near the coffee room. They do some neck rolls, march in place and then do a move Meza calls “the incredible hulk”—a shoulder stretch that brings welcome relief to those facing a computer screen for most of their day.

“When we go back to our stations, we feel refreshed,” says Meza, a member of SEIU UHW.

It’s called Instant Recess, and it’s the brainchild of Toni Yancey, MD, co-director of the UCLA Kaiser Permanente Center for Health Equity. It involves a quick, daily group exercise and is aimed at incorporating physical activity into a normal workday. It comes at a time when research is showing that workplace fitness initiatives targeting individual behavior (such as counseling and gym memberships) aren’t working. An organization’s whole infrastructure needs to be addressed, says Yancey.

That’s what makes Instant Recess so appealing. It demonstrates KP’s commitment to Total Health—including for a healthy and safe work life for KP employees as well as the members and communities we serve. It’s consistent with KP’s Healthy Workforce push, and also seems to help reduce workplace injuries and improve attendance.

At the South Bay call center, for instance, annualized sick days fell almost one full day per full-time equivalent between 2010 and 2011, when the department began Instant Recess. The number of ergonomic injuries went from three to zero.

While they are seeing results now, team members were wary when senior leaders at their medical center approached them about trying Instant Recess. “I was very skeptical,” says Darlene Zelaya, operations manager. “We can’t prevent the calls from coming in.” In fact, hold times for patients did go up when the team first implemented Instant Recess.

The unit-based team worked together with project manager Tiffany Creighton to adapt Instant Recess to their members’ needs. For instance, before calling a recess, team members check the reader board to assess how many agents can be off the phones at one time. They hold many small exercise bursts throughout the day instead of one or two longer ones. And they keep the music turned down low to avoid disturbing agents on the phone with patients.

A bit of exercise can help your team work better, reduce the chance of workplace injury and make the day more fun.

Inspire your team with stories, videos and tools for total health and safety.

In the South Bay lab, Instant Recess looks and sounds totally different—but is getting similarly promising results. That department blasts a boom box for 10 full minutes during the Instant Recesses it incorporates into its huddles at shift change twice a day. Clinical lab scientist Nora Soriano steps away from her microscope to join in. She’s lost 43 pounds recently, and she partly credits Instant Recess. Soriano, a member of UFCW Local 770, says the initiative inspired her to exercise more at home. “My son got me an Xbox,” she says. “I don’t stop for half an hour, sometimes 45 minutes.”

Not all of Soriano’s co-workers were so enthused when they first heard about Instant Recess. “I was kind of negative,” admits Julia Ann Scrivens, a lab assistant and UHW member. “I thought, ‘I am so busy. You want me to do what?’ ” Area lab manager Dennis Edora says, “It was a shock. No one knew what to expect.” But the lab’s staff had just been through some stressful changes—including getting new equipment and moving to a new floor—and team members were hungry for something that would help rebuild morale.

“We collaborated with all the different job codes,” says Edora. “Everyone added their different flavor,” she says, noting that employees rotate as a leader, some choosing Hawaiian dance moves, others yoga-inspired stretches. “Instant Recess really got us together. It wasn’t just exercise.” Moreover, it was helping reduce injuries: the lab reported only one repetitive motion injury in 2011, after beginning Instant Recess in April. There were five such injuries in 2010.