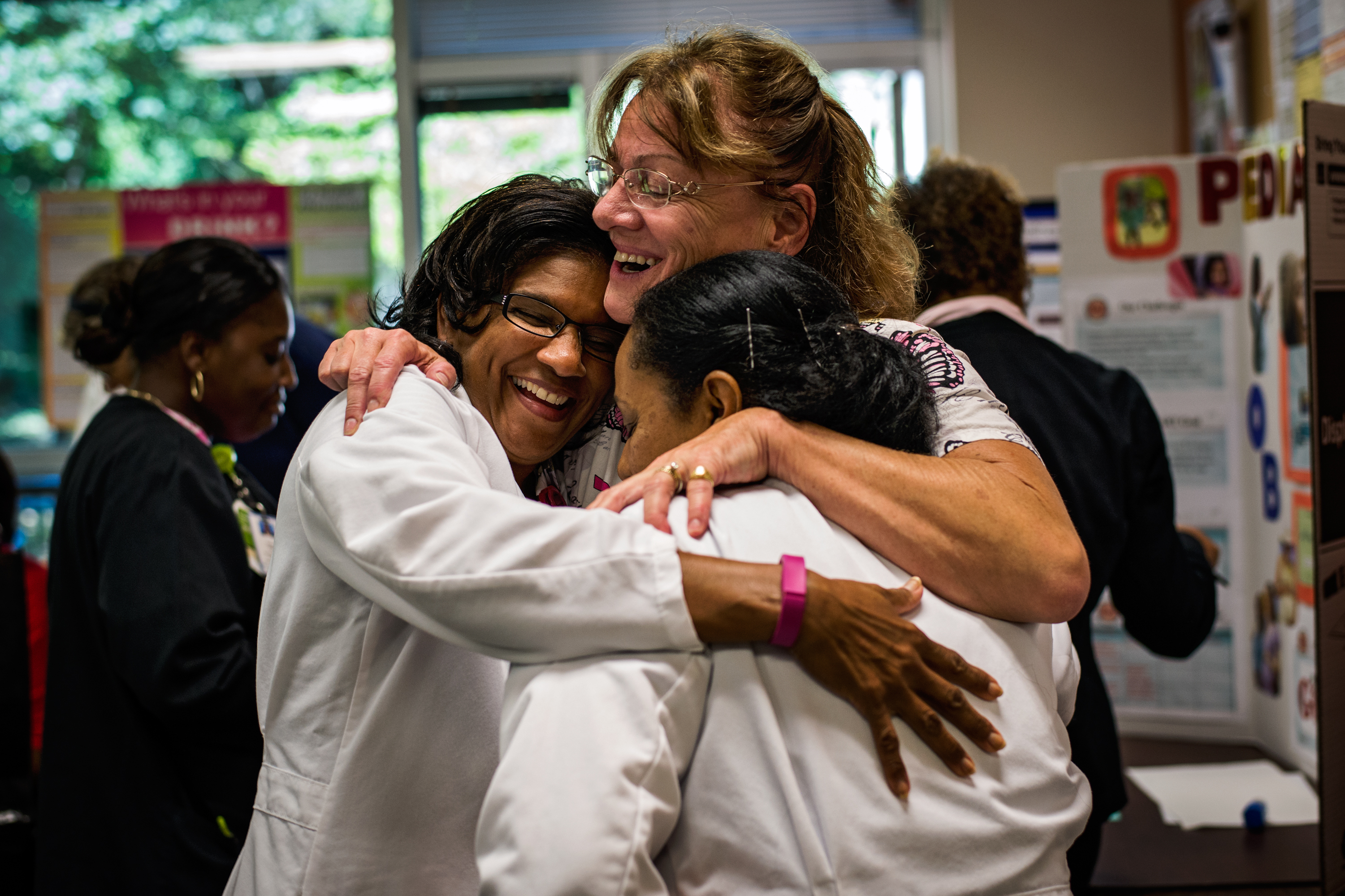 Joan Thayer, a lead cardiology nurse and member of UFCW Local 400, gets a group hug from colleagues at a recent UBT fair.

The Mid-Atlantic States region has approximately 220 unit-based teams with more than 5,200 members.

One problem, though: Some of those who belong to UBTs don’t know it.

The region’s seven UBT consultants, who made a commitment to work together as a UBT themselves, are trying to change that.

“Employees can’t contribute to the success of the team if they don’t know they are part of the team,” says Tracy Schrader, one of KP’s UBT consultants in the region, who is also an improvement advisor and OPEIU Local 2 member. “They don’t realize they can speak up.”

From their travels around the Capital Beltway to team meetings and huddles, the consultants—each of whom supports about 35 teams—knew there was a disconnect for some UBT members. So when they established their own team’s 2015 goals, they planned two main tactics: to host several UBT Fairs to raise the profile of UBTs, and to improve communications so all UBT members know they are on a team.

The fairs, which the consultants originally were planning to hold at the region’s largest centers over the summer, would showcase the work of the teams at that facility and highlight such LMP initiatives and priorities as Total Health, Workplace Safety and the Ben Hudnall Memorial Trust, which provides a variety of resources for career-advancing education.

“We wanted to hold fairs that would have a strong impact,” says Jennifer Walker, RN, a lead UBT consultant and improvement advisor.

Then—just as happens with frontline teams—they received some data that surprised them. The 2014 People Pulse results showed that some locations the consultants thought would score poorly on UBT-related questions scored well and vice versa. Armed with that data, the consultants decided to hold the first five fairs at the centers that had the most teams with more than 10 percent of members answering “no” when asked “are you in a UBT?”

“It was a real eye-opener,” says Preena Gujral, another MAS UBT consultant and improvement advisor who’s a member of OPEIU Local 2. “Data is very important. It’s perception versus reality.”

The data also led the consultants to combine their two tactics:  The fairs would be the method for communicating the message that all work group members are indeed part of a UBT.

Walker, one of the region’s lead consultants, says it can be difficult to get the message across, especially with large departments. Unlike small departments where everyone participates in UBT meetings, larger departments typically have a core group of employees who attend UBT meetings as representatives of everyone on staff. Employees who aren’t representatives don’t always realize that they are part of the team, too.

The energy and attendance of the first UBT Fair that the consultants sponsored, held at the end of June at the Fair Oaks Medical Center in Fairfax, Virginia, was higher than they expected, with more than 150 employees stopping by.

“The participation was fantastic,” says Wendy Williams, RN, a UBT consultant and member of UFCW Local 27.

Irene Taliaferro, a gastroenterology nurse practitioner, attended the fair at Fair Oaks in late August. She hadn’t realized she was a UBT member.

“I came to find out more about UBTs. Before I came to the fair, I knew nothing about them,” says Taliaferro. “We have a representative who goes to meetings. I don’t know much about it.”

Steve Pereira, UBT consultant and improvement advisor, hopes the blitz of UBT Fairs gives workers like Taliaferro a better understanding of the partnership and an incentive to be more involved.

“People want to know more than their 9-to-5 jobs,” Pereira says. “This is the opportunity for that.”

Because of their commitment to use the same tools as frontline UBTs, the consultants have been using the Plan, Do, Study, Act cycle of the Rapid Improvement Model in planning and holding the fairs.

So, Walker says, “We structured it so the fairs happen before the annual People Pulse is taken again, in September”—that way, the fairs serve as a test of change. Will the communication provided by the fairs improve the score on the “I’m in a UBT” question?

“We’ll look for the next People Pulse results to validate whether this was the best way to go,” she says.

Watch for an update on the consultants’ efforts next year on LMPartnership.org, after the 2015 People Pulse results are in.

Take action to get the help you need

No need to struggle on your own. There are lots of resources out there to guide teams along the Path to Performance:

48 people found this helpful. Was it helpful to you? YesNo